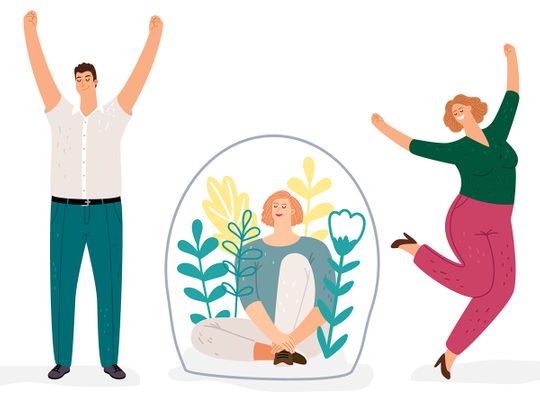 An introvert? Here’s Why You Could Be a “Natural Psychologist”

Growing up, we were often asked to speak up to be successful, to push ourselves fiercely to the forefront to be seen; warned that being shy and timid could leave us behind. No one wanted to be called a “wallflower,” stereotypical for hanging out quietly in corners and having fewer friends.

Now, with the advancement of the 21st century and Gen Z leading the clarion call for self-acceptance and self-love, though this long-misunderstood “introverted” section of society has many more and more have found their feet – it turns out there’s so much more to do. Behind the reserved veneer, introverts are now seen as having detail-oriented analytical minds that are actually able to understand how people feel, think and behave in social contexts and situations – wait for it – more naturally than the extroverted brain.

The psychological benefits of being a wallflower

Did you know that people generally work better individually than in groups? Or that the more people present in an accident, the less likely people are to help a potential victim? It turns out that introverts most likely do.

In 2018, researchers Anton Gollwitzer and John A. Bargh from Yale University, USA, tested nearly 1,000 individuals on their ability to understand how people behave in social contexts – also known as social psychological phenomena. . They gave them a series of multiple-choice questions taken from different psychology textbooks and conducted personality tests.

The results were clear – having introverted and melancholy characteristics showed greater accuracy in predicting how people behave in social contexts.

But, why does this happen?

Part of that, as study co-author Gollwitzer reasons, could be the amount of introverts who can watch or observe rather than participate. Sneha John, a clinical psychologist for children and adults at Dubai-based Camali Clinic, said: “They are able to observe what is happening in the environment much faster than when they talk or tell about it.”

You have to think about that root word, ‘intro’ – it has a lot to do not just with gaining energy from being alone, but also with the ability to look within. I think that’s a big strength when it comes to introverting – it’s that kind of questioning, that innate curiosity that introverts have – that often drives them to have deeper conversations and to understand themselves so much better and understand others.

“They have a keen sense of evaluating people – because their circles are limited, they deepen their relationships, unlike extroversion. They tend to understand people, can predict their behavior and emotions. They are very calm and attentive to people,” added Arfa Banu Khan, a clinical psychologist at Aster Jubilee Medical Resort in Dubai.

Introverts could, also by introspecting themselves, better understand how others think, feel and behave.

Bene Katabua, child and educational psychologist at Intercare Health Center Abu Dhabi, explained: “You have to think about that root word, ‘intro’ – it has a lot to do not just with gaining energy by being alone, but also the ability to look within. I think that’s a big strength when it comes to introversion – it’s that kind of questioning, that innate curiosity that introverts have – that often drives them to have deeper conversations and understand themselves so much better. and understand others.

Motivational bias: for me or not for me?

If you have ever seen someone tend to overestimate or exaggerate the results of a project, whether at school or at work, for their personal benefit, know that this is an example of motivational bias. Motivational bias is thinking error, where your response is driven by your idea of ​​a reward or punishment, and involves more positive illusions about ourselves and the world.

Katabua explained that introverts are less likely to have these biases when responding to a situation. “If you’re motivated by reward or punishment, you’re motivated to appear optimistic, sometimes exaggerated, but that doesn’t seem to be the case for many introverts.

“Their responses tend to be more realistic and sometimes melancholic – where they also consider the worst case scenario, as they look at the situation from many different angles.”

By not having a selfish bias, they are naturally more altruistic, sacrificial, do a lot of work for others without wanting anything in return. Compared to others, they might put less emphasis on themselves, what it means to them, and tend to be more altruistic, so to speak.

This, the study explains, may be one of the reasons why introverts are precise in their observations and introspection, and can better predict these social psychological phenomena.

John said: “By having no selfish bias they are naturally more altruistic, sacrificial, do a lot of work for others without wanting anything in return. Compared to others, they might put less emphasis on themselves, what it means to them, and tend to be more altruistic, so to speak.

A surprising element that adds to this effect is melancholy or sadness – which also stimulates judgments made without self-protective or motivational biases.

“Melancholic introversion is a personality temperament (emotional disposition) that is detail-oriented, analytical, sensitive, empathetic, and a deep thinker and feeler. They often strive for perfection in themselves and their surroundings, which drives them away of any motivational bias,” Dr. Laila Mohamedien, a specialist psychiatrist at Medcare Hospital in Sharjah, told Gulf News.

They often aim for perfection in themselves and in their environment, which keeps them away from any motivational bias.

Previous studies – for example, one in 1991 by American researchers published in Advances in Experimental Social Psychology Journal and another in 2011 on the performance benefits of depression published in the American Psychological Association’s Journal of Abnormal Psychology had explored how sadness encouraged people to act. to reduce this state, often systematically reflecting and processing information about themselves. The outcome of examining and reflecting on their own feelings could lead melancholic introverts to gain a more accurate understanding of social psychological phenomena – the way individuals behave in social contexts.

“In a gentle way you can shake the world”

History’s hall of fame includes many people who have identified as introverts, such as Mahatma Gandhi (who said the words above), Albert Einstein, JK Rowling and George Orwell. So what does this new discovery actually mean to us?

The study itself concludes that mastering the principles of social psychology can help us anticipate mass panics, political movements, societal and cultural changes – and that society could exploit individuals for this. While this doesn’t mean using statistics and science to predict the fall of the Galactic Empire like in Isaac Asimov’s historical science fiction work – The Foundation Trilogy, it could potentially prove useful for predict mass consumer behavior around business trends in the future.

Meanwhile, social psychological skills can also be beneficial in the workplace and in educational institutions. Katabua said, “Introverts analyze, reflect on things, make specific observations about their co-workers, their bosses, and their work. The term quiet confidence comes to mind.

According to Susan Cain, author of ‘Silent: The Power of Introverts in a World That Can’t Stop Talking‘, society is plagued by what it calls the extroverted ideal, a belief in an ideal, sociable, and daring personality type. The result then is a more marginalized and divisive society rather than an inclusive society.

Here are some quick tips and advice from experts for accepting yourself and leveraging your strengths as an introvert:

“Talk around your friends, talk around your family – say something you mean, that maybe no one else noticed. It is then easier to bring it to class and to the workplace,” Katabua advised.

2. Find the communication channel that works best for you

Introverts may prefer text and calls to writing. “If you ask them to write down their feelings, maybe that’s best. Be proud and celebrate the difference,” Khan said.

3. Tap into and develop your unique strengths

John advised: “It’s always better to look through the qualities rather than the personality type or the label that society tends to give – if you’re an active listener, for example, you can tweak that further and can definitely use it for a larger team and to help others. »

is it in the spirit or in the analysis of the data? • The register