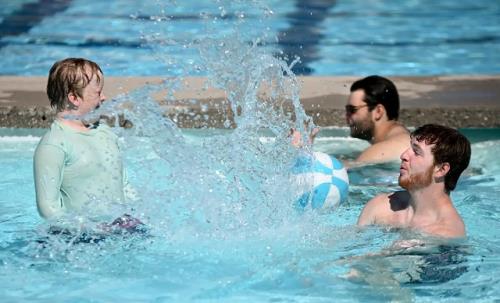 Reed wants to play Rock Paper Scissors with Britteny Guffey. With an intellectual disability, the 9-year-old’s speech is a bit difficult to understand, but Guffey knows exactly what he is saying.

Eventually she gives in and, yes, he beats her, much to his delight.

Guffey, who will be a senior in psychology in the fall semester at the University of Tennessee at Chattanooga, is a Big Buddy, a major psychology student working this summer as a counselor at week-long Friends Discovery Camps. at the Creative Discovery Museum or at the Camp ZooAbility of the Chattanooga Youth and Family Development Department.

In each, the campers have an intellectual disability.

Some have mental disabilities. Some have physical problems. Some are autistic.

â€œIt can be demanding, but it’s also rewarding,â€ said Guffey, who wants to become a school psychologist.

In early June, Guffey works as Big Buddy at a Friends Discovery Camp for 6 to 10 year olds. One of the days includes a visit to the Warner Park Pool.

â€œI learned a lot about myself, the kids, and how to care for this kid and his special needs,â€ Guffey says. â€œIt brings me closer to where I want to be personally and professionally. I want to be able to help all students, the non-disabled or the disabled.

Sean throws himself forward into the Warner Park pool, collapsing on his stomach with a big splash. He does it over and over again. Around and around the swimming pool.

â€œIs this the best time of your life? Asks Allyson Thompson, program manager and inclusion educator for the Creative Discovery Museum, as she follows him.

Sean doesn’t say anything. He keeps splashing around.

Jayne Griffin, director of education at the Creative Discovery Museum, said the involvement of Big Buddies is crucial for the camps.

â€œI can’t say enough good things about Big Buddies. I can’t, â€she said. “For us, we see this as support for these students, who then support our children.”

Getting campers to work and play with each other is the primary goal of camps, Griffin said.

â€œThe engagement piece is huge and it’s delicate,â€ she said. “It’s an art to do that and not to get high, but to be united because the goal is to get children to engage with each other.”

The one-on-one attention campers receive wouldn’t be possible without the Big Buddies, said Thompson, who graduated from UTC in 2004 with a degree in child and family services.

â€œMost of these children do not have access to a typical camp. We couldn’t organize this camp without the students, â€she said.

For students, working in the camps is an out-of-class training, a requirement for psychology majors.

â€œWe decided we wanted more hands-on experience, and we really wanted them to work together as a team, and a classroom doesn’t always fit that mold,â€ said Elaine Adams, Therapeutic Recreation Coordinator for the city â€‹â€‹of Chattanooga and an assistant professor in the Department of Psychology at UTC.

The Big Buddies are students in his classes who commit to working at least two weeks at the museum or town summer camp, Adams explained.

A total of six weeks of camps are held in the summer, and students can volunteer for all six if they wish, she said. For every two weeks worked, they receive three hours of academic credit.

â€œThe assumption is that if you sign up for the course, you were going to be doing the camp as well,â€ Adams said.

â€œIt’s not cold once inside.

â€œIt’s my booty. Don’t touch that.

Conversations can be overheard that way and that while campers frolic in the Warner Park pool. Some play water basketball. Some, like Sean, throw themselves and splash. Some are not sure they want to enter at all.

â€œThey just need this one-on-one time,â€ said Mariah Lyles, who will be a senior psychologist at UTC in the fall semester.

â€œI think it helps them a lot better than in a big classroom. They just need more time to figure it out.

Conor McGowan, who will also be graduating in psychology in the fall, said working with children was “just kind of learning that every child is different.”

â€œEveryone always says that, but you don’t and never really understand it until you experience being around other kids,â€ said McGowan, who is keen on pursuing a career in pediatrics.

â€œYou can still read a book. You can always learn something. But you can’t always be surrounded by different children. You can watch them do their own thing and learn from them.