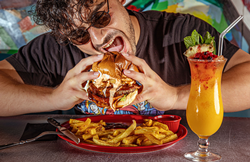 At the root of bad habits are negative beliefs, feelings and experiences.

If you want to curb unhealthy behavior, you must first understand why you are perpetuating it.

What drives a person to overeat knowing that it will not only lead to indigestion and weight gain, but also heaps of chocolate-laden guilt? What is the motivation behind a compulsive shopper’s need to buy that “must have” item despite the financial and emotional repercussions? According to a study conducted by PsychTests.com, the tendency to compulsively engage in unhealthy habits cannot be explained by a simple lack of willpower.

Analyzing data collected from 12,259 people who took the emotional intelligence test, PsychTests researchers compared the personality profile of people who struggle to break bad habits (Habit Strugglers) to those who are able to break them. (Habit Kickers). Here’s what the study found:

PERHAPS NOT SURPRISINGLY, PEOPLE WHO HAVE BAD HABITS ARE MORE LIKELY TO HAVE MENTAL HEALTH AND EMOTIONAL PROBLEMS

PEOPLE WHO HAVE BAD HABITS TEND TO HAVE LOW SELF-ESTEEM

“There is always a psychological and/or emotional component to bad habits. The problem is that these patterns of behavior become so characteristic of us, so ingrained in our daily lives, that it is more difficult for us to break them,” explains Dr. Ilona Jerabek, president of PsychTests. “We then create excuses for why we keep doing this behavior – ‘I’ve always done this…it’s been a habit I’ve had since I was a kid’, ‘I just have to give in when I’m stressed’, ‘I’m a drinker, just like my dad.’ We begin to convince ourselves that it’s not actually a habit, but a part of who we are – our personality. for which it started in the first place are never examined, so the habit continues unabated.

“If you want to curb unhealthy behavior, you must first understand why you are perpetuating it. Really dig as deep as you can. When did this habit start? What were the circumstances surrounding its origin – did you experience trauma, did you have a difficult childhood, did you get used to someone else? Is it of any use? Is there anything you take away from it, no matter how unsuitable? Is it possible that this habit is replacing another need, or hiding something that you no longer want to feel or experience again? Once you’ve discovered the seed, you can uproot it and plant a healthier pattern of behavior in its place.

Want to assess your EQ? Check out our emotional intelligence test at: https://testyourself.psychtests.com/testid/3979

Professional users, such as HR managers, coaches, and therapists, can request a free demo for this or other assessments from the full ARCH Profile battery: http://hrtests.archprofile.com /testdrive_gen_1

PsychTests AIM Inc. originally appeared on the Internet scene in 1996. Since its inception, it has become a preeminent provider of psychological assessment products and services for human resources personnel, therapists and coaches, academics, researchers and a host of other professionals around the world. The staff of PsychTests AIM Inc. is made up of a dedicated team of psychologists, test developers, researchers, statisticians, writers and experts in artificial intelligence (see ARCHProfile.com).

Share the article on social networks or by e-mail:

Do you have long COVID? Exercise can help