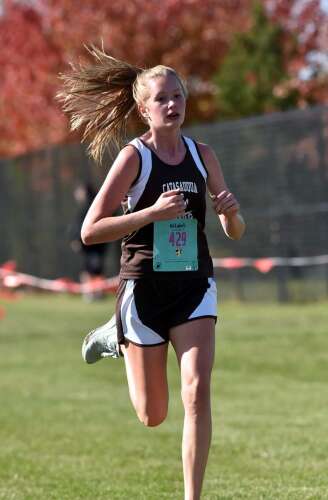 Until eighth grade, Lucy Brubaker tried her share of sports.

It was then that she had Kyle Rusnock as her science teacher, and he encouraged her to try out for the cross country team.

“I had tried a number of sports,” Brubaker recalls. “I played soccer for five years in elementary school. I had quit college and thought I needed a change.

“When I had Mr. Rusnock as a teacher, he recruited me to be part of the team. She is such a nice person and I appreciated that from the start. He created a fun environment.

From the start, Brubaker didn’t have a lot of adjustments.

“It just came naturally for me,” Brubaker said of his running debut. “I knew it would reduce my time. I wasn’t that fast when I started, but I kept working.

The oldest remembered the great improvement in her first year when she cut her time from 26 minutes to 23 minutes at the end of the year.

The following season, Brubaker started the year in the 24-minute window and eventually reduced his time to 20 minutes.

“It was a different year,” Brubaker said of last season. “There were six games, and it was difficult to have a constant rhythm. I knew I had to work hard this summer to get back to where I was.

“We started our preseason earlier than usual, and that should help us all.”

This season, Brubaker opened the season with a time of 24:30 at the Moravian Academy Invitational on September 3.

“I think things are pretty good this year,” she said. “I was around the same time as my second year. I feel good and I think I can get better.

Rusnock has appreciated his contributions over the past four years.

“Lucy has been exceptional since the first day she started running for us,” said Rusnock. “She is a hard worker and takes on any challenges she has faced.

“She always works hard in training, and it has been contagious for the other athletes on the team. So far Lucy has started well this year and I can’t wait for her to post some of her best times.

When not running, Brubaker spends time taking piano lessons. She thanks her teacher, Mary Siddons, for her guidance over the years.

In addition to her running and piano lessons, Brubaker has served as class president for the past three years and has been involved with student council, the National Honor Society, the Brown and White journal, and the Varsity C Club. .

“I’ve been doing this for a long time,” she said. “It’s very different from running. I don’t see it as an escape from running, and it’s something I appreciate. I used to give recitals when I was younger, but I haven’t done any in a while.

Brubaker plans to go to college in the fall, but she hasn’t made up her mind. She embarked on a career in psychology, but she did not finalize her plans. Brubaker has no plans to run in college, but she would join a running club at school.

She begins to realize that her high school cross country career is coming to an end. In the spring, Brubaker will be running the 800 and the 4×400 and 4×800 relays. Looking back, Rusnock and her parents, Andrew and Kim, had the biggest influence on her.

“It’s crazy that this is my last year,” said Brubaker. “It hasn’t really touched me yet. Maybe that will be the case at our senior party this week. It will be difficult for me to understand. “

Until then, Brubaker will be enjoying the moments.

Lucy Brubaker tried her hand at other sports before embarking on cross country.