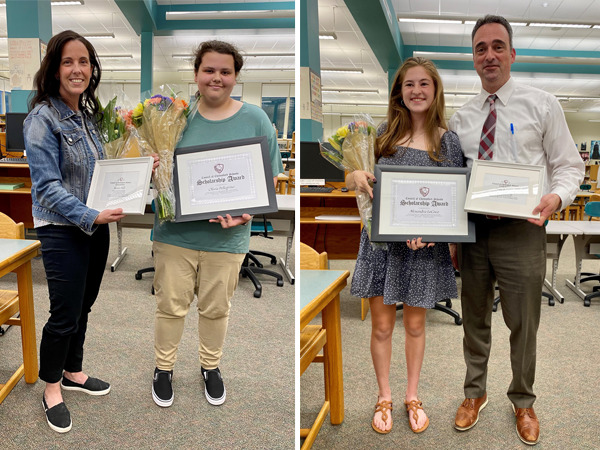 CHELMSFORD – Class of 2022 graduates Olivia Pellegrino and Allie LoCoco have been named this year’s recipients of Chelmsford Schools Board scholarships, the council’s scholarship committee announced at its quarterly meeting on May 18.

The scholarships are presented to two seniors who best describe in essay form which Chelmsford Public Schools staff member has had the most profound impact on their lives. Essays are judged by the scholarship committee and recipients are invited to the spring board meeting to read their essays aloud to their mentors.

Pellegrino and LoCoco will receive $1,000 scholarships.

Pellegrino submitted a moving essay about Katherine Hill, a science teacher at McCarthy Middle School, who Pellegrino wrote was instrumental in helping him break free from his anxiety issues. Pellegrino described her mental health issues, particularly in grades 7 and 8, the years she was a member of Hill’s classes.

“I think it’s that she understood me,” Pellegrino said. “Not everyone understands me. She always took the time to get to know her students and how they learned best. She did this all day, every day.

Pellegrino graduated on June 4 after earning high honor roll status, served as track and field team captain and a member of the World Languages ​​Honor Society.

“(Hill) was essential in getting me to where I am today,” Pellegrino wrote. “She wouldn’t give up on me, and in turn I learned not to give up on myself, whether in or out of the classroom.”

Pellegrino will attend Westfield State College this fall where she will major in history. She plans to become a teacher.

Pellegrino is the daughter of Michael and Laurie Marry-Pellegrino.

LoCoco, who will pursue a double major in Deaf Studies and Psychology at Holy Cross, hailed the influence of CHS director Steve Murray in his essay. LoCoco, who was born partially deaf, wrote about her desire to learn American Sign Language when transitioning to CHS her freshman year — even though she was exempt from CHS’s world language requirement.

Although ASL is not yet part of the World Languages ​​curriculum, Murray found and approved a three-year online ASL course for LoCoco. Simultaneously, Murray and World Languages ​​staff were adding a third language to the curriculum and factoring in ASL. A student body vote resulted in ASL 1 being added to the curriculum for the 2020-21 academic year, followed by ASL 2 in 2021-22.

“This process took a long time, but (Murray) never gave up,” LoCoco wrote. “At the end of my sophomore year, Mr. Murray invited me to be on the hiring committee for an ASL teacher.”

There are over 125 students enrolled in ASL, either as a world language requirement or as an option. LoCoco said it wouldn’t have been possible without Murray’s leadership.

“He’s one of the most positive and welcoming people I’ve ever met,” LoCoco said. “As the class principal secretary, I was able to work with him and he always had the most positive attitude. I wanted that kind of role model in my life.

In addition to serving as a class officer, LoCoco was the captain of the girls’ soccer team (9-5-5), which qualified for the MIAA division. 1 Tournament, and a sprinter in the indoor and spring athletics teams. Student of the Month for October at Emerson House, she is also on the student panel at Boston Children’s Hospital and is a member of the LOFT leadership program for students who are deaf or hard of hearing.

LoCoco is the daughter of Joe and Karen LoCoco.

Hill and Murray will each receive a check for $100.