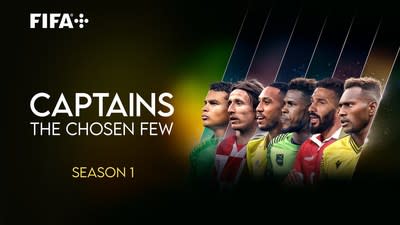 FIFA+ launches Season 1 of the groundbreaking Captains docuseries, which closely follows six iconic team captains on their journey to qualification for the FIFA World Cup™

LONDON, October 25, 2022 /PRNewswire/ — Ahead of the 2022 FIFA World Cup™, FIFA+ today released the platform’s latest and most ambitious Original to date, Captains, a genre-altering behind-the-scenes docuseries of some of the biggest names in world football in their toughest times.

With eight episodes released exclusively on FIFA+ and then Netflix, Captains: Season 1 intimately follows icons from around the world, including from Brazil Thiago Silva, Croatia Luka Modricand from Gabon Pierre-Emerick Aubameyang, as they try to qualify for the 2022 FIFA World Cup.

The series – filmed on a scale never seen before in football media – marks a new frontier for a sports documentary series. Along with FIFA+, it was produced by Fulwell 73, with Leo Pearlman, Ben Turner, Gabe Turner and Richard Thompson as executive producers.

By tracing the players’ journey to qualification, the show addresses how they juggle family life and the expectations of a nation, shedding light on the complex psychology behind performing at the highest level.

Some end up being successful, while others miss the mark, but every high and low is listed as Captains takes viewers behind the scenes of those who carry the weight of their nation.

The captains followed in season 1 are:

Discuss the series, Captain of Brazil Thiago Silvasaid: “For me, the FIFA World Cup is the pinnacle of achievement in football, and to be there alongside my compatriots is the greatest honor on the planet.

“We left everything on the pitch to qualify and to have our journey documented so intimately in Captains is an experience like no other. The series captures our emotions, our frustrations, our ups and downs like few have before.”

Additionally, FIFA+ is also delighted to announce Captains: Season 2which will follow a collection of “soon to be revealed” captains, as they take their nations to the highest mountain in sport, the FIFA World Cup Qatar 2022™.

Scheduled to be released after the tournament, this second season will feature the goals, matches and drama off the pitch as they all aim for ultimate glory.

Speaking during the announcement, charlotte burrFIFA’s Director of Strategy, Digital and FIFA+ said: “FIFA+ was created to bring fans closer to the game they love, and that’s why Captains: Season 1 has us so excited – never before. never before had a series offered such an intimate look at the turbulent journey to a World Cup and made us feel more connected than ever to some of the biggest names in world football.”

Captains is filmed around the world for a year and is the latest addition to the FIFA+ Originals content series.

Fulwell 73 Partner, Leo Pearlmanadded: “Fulwell’s first-ever documentary was about six unknown football freestylers on the hunt for Diego Maradona. Fast forward 15 years and making a documentary series about six iconic national captains, aiming to lead their teams to the FIFA World Cup is a dream come true. But it’s more than just a story of wins and losses on the pitch, it’s an investigation into leadership, the mental and physical pressure and how one functions when a nation’s hopes rest on its shoulders. It is the human condition put under the microscope, through the intense prism of sport, scrutiny and expectations at the highest level.”