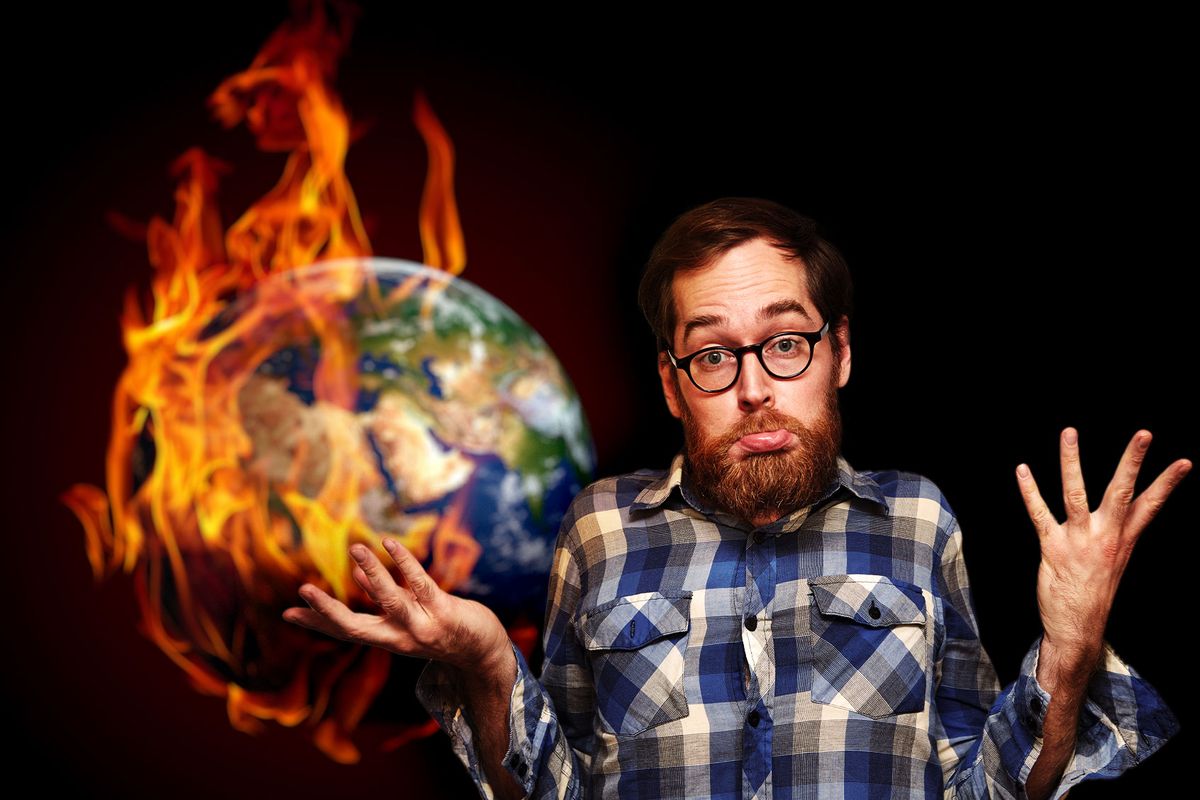 How a brain quirk keeps us from caring about climate change

April 6, Dr Peter Kalmus, a NASA climatologist and author, drove to the JP Morgan Chase bank building in Los Angeles, pulled a pair of handcuffs from a cloth bag, and chained himself to the front door. With tears in his eyes, he spoke about the climate crisis to a group of supporters.

“We’ve been trying to warn you for so many decades that we’re headed for a fucking disaster,” he says in a video of the protest that has since disappeared. viral on Twitter. “And we end up being ignored. Scientists all over the world are being ignored. And that has to stop. We’re going to lose everything.”

Like me, Kalmus is a scientist with a passion for discovering the nature of reality. A reality threatened by the rapid rise in global temperatures. Unlike me, Kalmus does something about it. He is a member of Scientist Rebellion – a group of scholars and scientists fighting to bring attention to “the reality and gravity of the climate and ecological emergency by engaging in nonviolent civil disobedience.”

Watching Kalmus deliver his impassioned speech on the bank steps, I am both humbled and envious. I wonder why I don’t seem to care as much about the climate crisis as he does. The best explanation from my perspective as a cognitive scientist involves a fundamental flaw in my human psychology: the inability to care so much about what happens in the distant future. But I wondered how Peter Kalmus could explain the public’s apparent lack of enthusiasm when it came to fighting the good fight. So I wrote to him to ask.

“I think climate denial in the media plays a huge role here,” he replied. “Pieces of the emergency are reported (and they are scary) but they are not related to the future and their impact on civilization, i.e. the potential collapse of civilization does not is never mentioned.”

There are solid numbers to back up this claim. “Less than a quarter of the public hears about climate change in the media at least once a month,” writes Mark Hertsgaard, editor of Columbia Journalism Review and one of the co-founders of Covering Climate Now, a media collaboration fighting to get more media coverage of the climate crisis. And when these stories are told, they rarely address the existential threat posed by the climate crisis, but instead present hopeful (and often delusional) solutions.

“The effectively irreversible nature of most climate impacts is also never mentioned,” Kalmus wrote. “Instead, technological ‘solutions’ are usually highlighted, or the feeling that we still have a ‘budget’ for a heating step (e.g. 2°C) that is implicitly ‘safe.’ so there is no urgency in the media.”

The thing is, I understand the urgency. And yet, I do almost nothing. I spend most of my days reading books, watching Netflix, and planning dinner. Like almost everyone on this planet, I don’t act like there’s a climate emergency.

The thing is, I understand the urgency. I have read the conclusions presented in the third volume of the report of the Intergovernmental Panel on Climate Change (IPCC) published on April 4. It was a document full of unequivocal warnings and the catalyst for Kalmus’ protest. It warns that we are on track for a global temperature rise well beyond the 1.5°C target set by the Paris Agreement (and perhaps raised to around 3°C) by the end of the century without a functional plan in place to prevent it from happening. Just to be clear, this could make most of the planet uninhabitable for our species. I to know this. And yet, I do almost nothing. I spend most of my days reading books, watching Netflix, and planning dinner. Like almost everyone on this planet, I don’t act like there’s a climate emergency.

It is possible that, like many others, I am behaving in a way common to someone dealing with the threat of an imminent threat cultural trauma. It is a term to refer to a horrific event that irrevocably changes the identity of a society or destroys the social order. A common response to an imminent threat of this magnitude is to fight to maintain status quo. In doing so, a kind of social inertia arises where people do whatever they can to continue living their lives as they always have, despite the imminent implosion of society. Perhaps, like so many others, I am fully aware of the horrific consequences of climate change, but my mind generates a kind of trauma-avoiding denial that shields me from reality. It helps me ignore the IPCC report and listen to “Bridgerton” instead.

There is, however, an even older psychological response than denial that could explain why, like so many others, I am not chaining myself to the banks in the face of the impending extinction of humanity.

Edward Wasserman is a psychologist studying animal behavior and author of the book “As if by design“ who offered an elegantly simple explanation of why humans are so bad about climate change. It boils down to how all animals – including humans – were evolutionarily designed to deal with common day-to-day problems like finding food, security, or sex.

The problem is that humans, like all animals, have evolved to solve problems in the here and now. This means that our emotions – the primary driver of behavior – are designed to force us to act based on the potential for immediate reward.

“Being the first to spot a ripe berry or a deadly predator might give an organism only a short window of time to engage in adaptive action,” Wasserman wrote in his blog for Psychology Today. “This reality prompts agencies to act impulsively. However, such impulsiveness is obviously at odds with appreciating and addressing the slowly increasing warning signs of climate change.”

The problem is that humans, like all animals, have evolved to solve problems in the here and now. This means that our emotions – the primary driver of behavior – are designed to force us to act based on the potential for immediate reward.

Humans are unique in that over the past 250,000 years we have developed the ability to think about the distant future. We can contemplate what our lives might be like months or even years later – something that no other animal species can do (as far as we know). But this newly evolved cognitive skill operates separately from the old emotional system that generates everyday animal behavior.

If you decide, for example, to invest in retirement savings, it is because you have used a complex intellectual calculation on what your life could be like in the decades to come. There’s nothing immediately satisfying about saving money right now. Retirement diets aren’t impulsive acts that generate dopamine rushes, like drinking a daquiri, solving Wordle, or eating a chocolate chip cookie. Planning for the distant future is a purely intellectual exercise.

I use the term prognostic myopia to refer to this disconnect between the human capacity to think about the distant future and our inability to really To feel strongly on this future. Prognosis signifies his ability to predict the future; myopia means myopia. It is prognostic myopia that explains the inertia of individuals, societies and governments when it comes to solving climate change. The IPCC report made it clear that fossil fuel extraction must end as soon as possible, lest we set ourselves on the path to extinction. And yet, on April 11, less than a week after the IPCC report, the Canadian government has approved the Bay du Nord offshore oil project, which will extract 300 million barrels of oil off the coast of Newfoundland and Labrador. On April 15, the Biden administration announcement that the Bureau of Land Management will resume and thereby increase the leasing of oil and gas on public lands (breaking a campaign promise). Either way, this is exactly what the IPCC report says we must stop doing immediately if we are to prevent human extinction. This is prognostic myopia in action. This feels more important to deal with the threat of rising oil prices or stability of the economy here and now even if it precipitates our extinction in a few decades. This is both unforgivable and completely understandable in the context of human psychology.

Kalmus, however, is different. It reacts to future threats as if it were a present danger, apparently avoiding the problem of prognostic myopia. His emotional reaction is raw, inflexible, and drives him to action. It is both exceptional from the point of view of human conditions and admirable. If we heed his warnings and act with the urgency outlined in the IPCC report, we hope our species will avoid extinction.

Admitting that humans are ruled by impulsiveness and intimidated by nonchalance in the face of cultural trauma by prognostic myopia is no excuse for inaction. We may not all feel the same about the future as Peter Kalmus does, but we can admit that we should listen to him. “People should come together, make great efforts and take risks to reawaken society,” he wrote to me. “Civil disobedience is the most effective thing I have found so far to push back the cultural wall of inaction and despair.”

More than likely, I, like most people, will never feel the emotional connection to the climate change issue that Kalmus feels. But knowing that there is a psychological explanation for our lack of emotional investment, we can instead appeal to our intellect to guide our actions. We can decide to listen to these scientists who are literally screaming at us to do something. Maybe it’s time we let those who can sense the future guide us there.