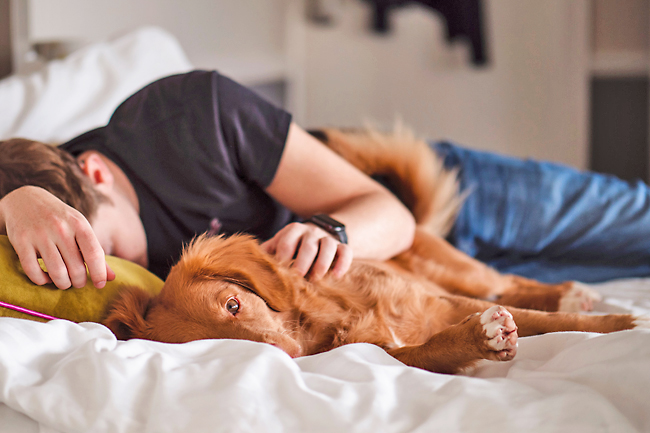 THE WASHINGTON POST – We already know this pandemic has been horrific for teens and their mental health.

Last month’s mental health advisory from the Surgeon General of the United States (USA) underscored the scale of the problem, as feelings of hopelessness and even suicidality have increased in recent years in this group of age, with the pandemic only adding to teenagers. ‘ stress levels.

But there’s another element that plays an important role in teen mental health, especially now: sleep and the role it plays in improving mental health and emotional resilience. As children and teens readapt to the world in the wake of pandemic isolation, sleeping well can be a protective factor, said Lisa Meltzer, a pediatric psychologist at National Jewish Health in Denver.

“When you’re not sleeping well, emotional regulation is one of the first things to do,” she said.

“Insufficient, poor quality or poorly timed sleep – each of these factors can worsen mental health problems.”

According to many sources, including the National Sleep Foundation and the American Academy of Sleep Medicine, teens should get between eight and ten hours of sleep per night. But less than a quarter of high school students are meeting even the minimum, according to results from the most recent National Youth Risk Behavior Survey, conducted every two years by the Centers for Disease Control and Prevention (CDC).

From a mental health perspective, aiming for more than the eight-hour minimum can be very helpful, experts say. In one study, teens who slept 8 3/4 to nine hours a night had the lowest levels of mental health problems, including mood swings, feelings of worthlessness, anxiety and depression.

In a recently published study examining college students’ sleep and mood, Tim Bono, associate professor of psychological and brain sciences at Washington University in St. week also had the highest increases in happiness and well-being throughout the semester.

This was true even for students who had lower baseline happiness levels at the start of the study.

Students with the most irregular sleep schedules were unhappy nearly twice as often, according to the study. Key sleep best practices, including consistency, appear to “significantly (affect) the trajectory of students’ psychological health,” Bono said.

When teens don’t get enough sleep during the week, they often sleep late on weekends to make up for the lack, perpetuating the cycle.

Tiffany Yip, chair of the department of psychology at Fordham University, has studied how sleep affects adolescents’ ability to cope with discrimination-related stress.

A study she co-authored found that a good night’s sleep helped teens cope with discrimination and discrimination-related stress the next day.

Specifically, adolescents who had slept well the previous night were better able to select effective coping strategies, such as asking for help and not ruminating or obsessing over what had happened, he said. she declared. “When teenagers sleep well,” she said, “they are better able to cope with the stresses that await them tomorrow.”

And what about teenage sleep after a stressful day? It provides an emotional reset, helping them bounce back so there’s less fallout the next morning.

The researchers documented this “rebound” effect, finding that when teens slept more, they had a more positive overall mood the next morning, much like their mood after a low-stress day.

A “dose-dependent” association also exists between the amount of sleep adolescents have and their mood and self-harming behaviors. An analysis of youth risk behavior survey results found that high school students who reported sleeping less on school nights were proportionally more likely to report feeling sad or hopeless.

Compared to teens who slept for at least eight hours, those who slept for six hours or less were more than three times more likely to have considered suicide, made a plan, or attempted to , according to the analysis.

“We know that for different mental health diagnoses, anxiety and depression in particular, sleep can be both a symptom and a negative outcome of the disorder,” she said. “If we can improve sleep, some of the mental health symptoms will improve. But simply treating the sleep problem won’t necessarily cure depression or anxiety.

Instead, she recommended that both sides of the equation — sleep issues and mental health issues — be addressed simultaneously. (She also notes that teens sleeping too regularly — more than 10 hours a night — can be a sign of depression).

Meltzer emphasized the importance of sleep regularity for teens, as well as good sleep habits and best practices upon waking.

She also recommended teens not linger in bed, especially if they spend that time ruminating or using electronic devices.

“When we talk about sleep and mental health, those are the three takeaways: one, a consistent schedule; two, bright light in the morning; and three, only being in bed when sleeping,” Meltzer said.

Here are some other suggestions for promoting better sleep in teens:
– Moderate caffeine consumption: Caffeine is consumed by about 80% of teenagers and is a quick and effective stimulant, but caffeine in the afternoon or evening can make it more difficult to fall asleep that night. (As neuroscientist Matthew Walker notes in Why We Sleep, caffeine has a half-life of about five to seven hours, which means that even at bedtime half the caffeine will still be in your body. system).

– Be strategic when it comes to napping: Teenagers who nap too late in the day and/or too long can end up in a bad cycle.

– Exercise: Moderate to vigorous physical activity, such as walking, running, or playing basketball, can help set the stage for better sleep that night.

Again, timing is important: Late-night exercises can make teens feel more alert. (If evening practices and the like cannot be avoided, being intentional about winding down before bed can help counteract this).

Bono described sleep as an “investment”. As he told students, “Yes, it takes away the number of waking hours you have, but it ensures that during the hours you’re awake, you’re at your peak performance for happiness, for connect with other people and for well-being.”

Although it’s not a panacea, he says, “it’s a simple thing that can go a long way.”