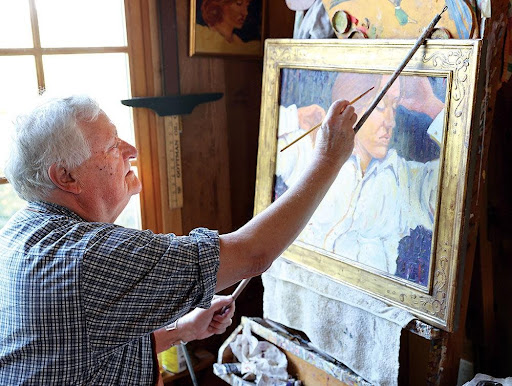 As far as we can remember, human beings create art, but is there any science behind this constant creation? An artist from Kirkwood took on this mission to answer the question, is there a link between art and science?

For the past decade, Kansas City, MO artist Bob Dick – known professionally as RH Dick – has been involved in “Creativity and madness”, an organization founded by Yale psychiatrist Barry Panter, whose primary mission is to study the connection between art and science. The group has published three volumes of psychological case studies; their latest features a section by Dick himself.

“Creativity and Madness” was founded in 1981 through the American Institute of Medical Education (AIMED) to provide training to scientists and physicians in the name of discovering the scientific links between psychology and art. Preaching the importance of looking outside the realms of science to maintain analytical research, Creativity and Madness seeks new ways to link the arts and sciences.

“These cats are fascinated by the artist because most of them are quantifiers. They are scientists, ”Dick said in an interview with The times of Webster-Kirkwood. “They have struggled with numbers and the scientific method since the Renaissance. Guys like me come here and we talk about the vibe, the joy, the afterlife stuff. They look at us with insect eyes. It amazes them.

The group includes eminent figures, from neuroscientists and physicists to cartographers and brain surgeons. The group of researchers come together to hold conferences to hear artists like Dick explain what prompts them to do what they do.

“Art has a power that modern man is just beginning to realize,” Dick said. “What attracts us to art? It is this power that has not yet really been analyzed. We know art changes the brain, but we don’t know why – and that’s why they’re intrigued. “

Dick was featured in Creativity & Madness’s most recent case study, discussing his time in the Taos Artist Colony, New Mexico. Visiting for the first time at the age of 12, Dick felt an inexplicable strength in the surrounding pueblos and returned to Taos on several occasions during his career.

“How do you describe Taos to a civilian?” Everything is fine. Artists, poets, monsters, snake handlers, outlaws, motorcycles, dropouts, walk-in, gays, lesbians. Everyone is on a quest. Everyone is trying to find the center, ”Dick said. “If you are a seeker, if you are an artist or a poet, then Taos has an attraction that will grab you by the throat and not let go.”

Dick’s introduction to his most recent case study section speaks of a “zone” in the creative process where time and space are shattered. Artistic genius, he said, is determined by how long one can exist in that area.

“I’ve talked to other creators and we all agree that if you, in your lifetime, can produce a great thing or two, that’s when you jumped into it. madness, ”he said. “What’s happening in this flow is that the logic has fallen to the ground. Rationalism has disappeared. You are dealing with ethereal and mystical things.

The artist first experienced this phenomenon several decades ago, while working with fellow artist and model, Andrea Paulette, whom Dick calls “a true muse.” Dick worked with Paulette for several years, creating various paintings and photographs, and what he considers his best work – a sculpture of Paulette created in a mist fueled by beer and aspirin.

“She would come in the morning and strike a pose, and I was working,” Dick said. “After seven days and seven nights, I am parting ways. She looked at me and she said, “What’s wrong with you? And I said, ‘I can’t take it anymore.’ And she got out of here and that’s the last time I saw her.

“While she was sitting there and I was working, I had passed the threshold,” he continued. “When it ended, I went into depression. I entered a sulky and dark life. I didn’t know what was wrong with me. I had given so much. I was empty.

Ultimately, Dick, unlike many other famous artists, was able to pull himself out of this obscurity, encouraging him to work with “Creativity and Madness” to understand the root of these common experiences and symptoms and how they relate to the world. artistic.

To this day, Dick hasn’t parted ways with the play he created with Paulette all those years ago.

“I’m proud of it, but at the same time I’m not sure I did,” he said. “Some of my best things have come from beyond. This is madness ? It’s possible.”