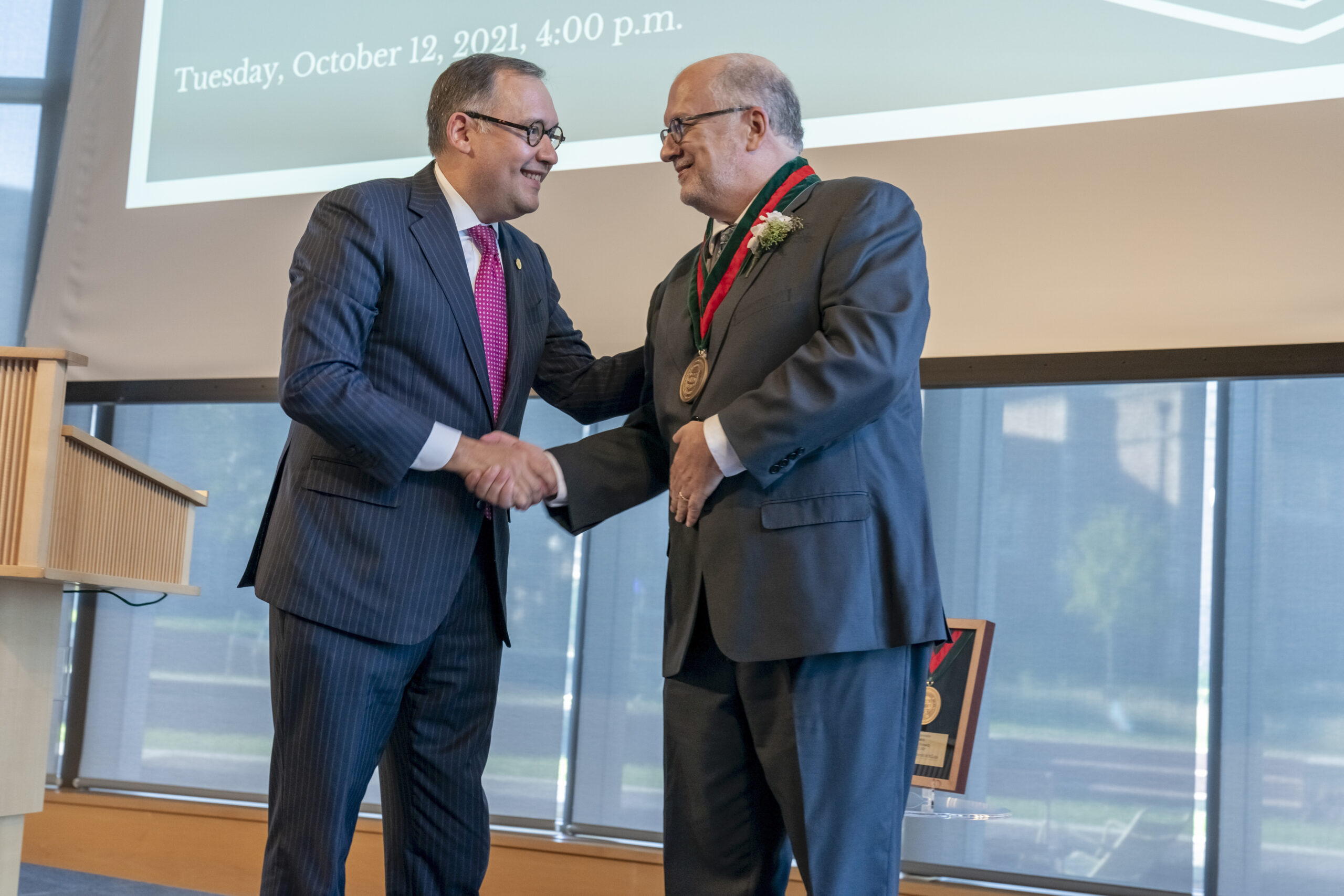 An installation ceremony was held on October 12 at Hillman Hall.

“Doug’s tireless work in systems science and tobacco control is helping to improve lives around the world,” said Mary McKay, vice provost for interdisciplinary initiatives and former dean of the Brown School. “His efforts make evidence-based public health policy immediately effective for all of us.”

“Doug Luke is a renowned tobacco regulatory and health policy expert who tackles important public health issues in his work,” said Chancellor Andrew D. Martin. “It is fitting that he is the first holder of a chair named in honor of Irving Louis Horowitz, whose lifelong research focused on pressing problems of social policy.”

Over the past decade, he has used systems science methods, in particular social network analysis and agent-based modeling, to solve important public health problems.

Luke runs the university Public Health Systems Science Center. Under his leadership, the center used network analysis to study the diffusion of scientific innovations, to model the formation of organizational collaborations, and to study the relationship between mentorship and future scientific collaboration.

In addition to his appointment at the Brown School, Luke is a member of the Public Health Institutedirector of evaluation for the Institute of Clinical and Translational Sciences and founding member of the Washington University Network of Dissemination and Implementation Researchers. He served on a panel for the Institute of Medicine that produced a national report on the use of agent-based modeling for tobacco regulatory science.

According to a 2019 PLOS Biology bibliometric analysis, Luke ranked in the top 1% of scientists in the world based on the number of most-cited papers.

The Irving Louis Horowitz Professorship in Social Policy was established in 2020 by Mary Curtis Horowitz to honor her late husband’s contributions to the advancement of social policy and to support ongoing research and teaching in this area.

“Professor Luke exemplifies the kind of social science that Irving championed throughout his life: research based on evidence, not ideology, and research focused on pressing questions of social policy, rather than an ivory tower,” said Mary Curtis Horowitz. “Doug Luke tackles real-world problems and unravels what works and what doesn’t and uses innovative approaches to address important public policy concerns. It’s the kind of work that inspires confidence in what we social scientists can do, and it’s the kind of work that will guide us all to a better world.

Irving Louis Horowitz (1929-2012) was the Hannah Arendt Emeritus Professor of Sociology and Political Science at Rutgers University. Throughout his career, he taught at many institutions around the world, including the University of Washington from 1963 to 1969. He served as chair of the sociology departments at Hobart and William Smith colleges, University of Washington and Rutgers University. Horowitz also served as Chairman of the Board and Editorial Director of Transaction Publishers.

A prolific writer, Horowitz is the author of more than 50 books, many of which have appeared in translation and multiple editions, as well as hundreds of articles and essays. He has published books on a range of topics from political theory, education and academic affairs to public policy and publishing affairs. He was widely considered the authoritative voice on Cuban communism. Horowitz has received numerous awards for his contribution to public life.

In 2010, Penn State University announced that the “Irving Louis Horowitz Publishers Archive – Transaction, 1939-2009” was open for public search in the Historical Collections and Penn State Labor Archives of the Special Collections Library of the Eberly Family, University Libraries. The archives document the expansion of social science research over the past half century.

Mary Curtis Horowitz leads the Horowitz Foundation for Social Policy as president and is also one of its trustees. The foundation supports the advancement of social science research with a policy focus. Its specific mission is to award scholarships to aspiring doctoral students who support their thesis research. Since its creation in 1997, the foundation has granted grants to 250 researchers in more than 100 universities around the world.

She also sits on the board of a human rights organization, the Center for a Free Cuba, and is committed to literacy advocacy and other public service activities. In the past, she has served on the board of MIT Press, the board of the Society for Scholarly Publishing, and various publishing industry committees.

A 1968 graduate of the University of Washington, she found ways to support the institution that put her on her path. She serves on the Brown School National Council and sponsors a series of lectures on social policy at the school. It also provided support to university libraries and endowed an arts and science scholarship.