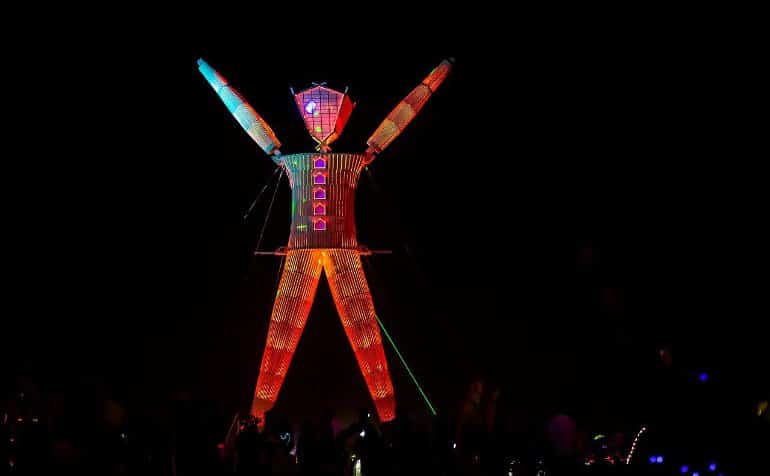 Many attendees of gatherings like Burning Man report ‘transformative experiences’

Summary: Attendees of social gatherings like Burning Man who report the event as a transformative experience in their lives report feeling more connected with all of humanity and are more willing to help distant strangers.

Throughout history, mass gatherings such as collective rituals, ceremonies and pilgrimages have created intense social bonds and feelings of unity in human societies.

But Yale psychologists wondered if modern secular gatherings that emphasize creativity and community serve an even broader purpose.

The research team studied people’s subjective experiences and social behavior at secular mass gatherings, such as the annual Burning Man festival in the Nevada desert.

They found that people who reported transformative experiences at the gatherings felt more connected with all of humanity and were more willing to help distant strangers, the researchers report May 27 in the journal. Communication Nature.

“We’ve known for a long time that festivals, pilgrimages and ceremonies make people feel more connected to their own group,” said Daniel Yudkin, postdoctoral researcher and first author of the paper. “Here we show that experiences at secular mass gatherings also have the potential to expand the boundaries of moral concern beyond one’s own group.”

The researchers set up booths at the events inviting passers-by to “play games for science”. Those who agreed to participate were asked about their experiences at the events as well as their willingness to share resources with friends and strangers.

People who reported transformative experiences also reported feeling more socially connected with all human beings, and with each passing day of these events, participants widened their circle of generosity beyond family and friends to include distant strangers.

They recontacted some of the original attendees as well as 2,000 people who had attended the event but were not originally interviewed. The researchers found that the transformative experiences and their prosocial feelings persisted for at least six months.

“The results are an important reminder of what we missed during the years of pandemic isolation,” Yudkin said. “Powerful social experiences, or what sociologist Emile Durkheim called ‘collective effervescence’.”

Crockett concluded, “Transformative experiences help people transcend self-boundaries and connect with all of humanity – crucial qualities to cultivate as we work to end this pandemic and prevent future ones.”

Funding: The research was conducted as part of The Experience project funded by the John Templeton Foundation.

About this psychology research news

Humans have long sought experiences that transcend or alter their sense of self. By weakening the boundaries between self and others, such transformative experiences can lead to lasting changes in moral orientation.

Here, we investigated the psychological nature and prosocial correlates of transformative experiences by studying prior participants (not= 600), during (not= 1217), 0 to 4 weeks later (not= 1866), and 6 months later (not= 710) they attended a variety of multi-day secular mass gatherings in the US and UK.

Observations from 6 field studies and 22 online follow-up studies spanning 5 years showed that self-reported transformative experiences at mass gatherings were common, increasing over time, and characterized by feelings of universal connection and new perceptions of others.

The participants’ circle of moral esteem widened with each passing day – an effect partially mediated by the transformative experience and feelings of universal connection. Generosity was remarkably high across sites, but did not change over time.

These findings highlight the prosocial qualities of transformative experiences at secular mass gatherings and suggest that such experiences may be associated with lasting changes in moral orientation.

Uncovering the secrets of the brain – News