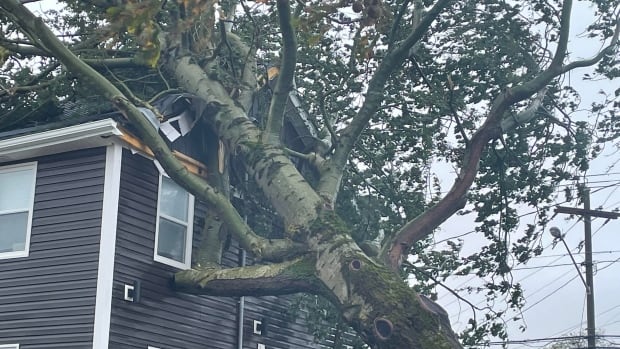 Within hours of early Saturday morning, Post-Tropical Storm Fiona downed hundreds of power lines and thousands of trees, while washing away docks and destroying buildings and livelihoods. The initial shock and living with the grim new reality is taking a toll on the mental health of some Islanders.

MacKinnon said dealing with the stress of living through the storm and all the resulting damage would have been hard enough on its own, but it’s even harder considering what the Islanders were already facing.

“COVID and the economy and all the challenges we’ve been through before that – it’s almost an insult to injury that we have to move forward to deal with a disaster of the magnitude like the one we have had with Hurricane Fiona,” she said.

Allow yourself to feel

When you’re in survival mode, MacKinnon said, everything stops except focusing on what you need to do to get from that moment to the next.

“It’s a really positive and healthy survival task, to be able to do that,” she said. “But once those immediate threats pass, that’s when the emotion comes back…

“For some people it’s a good scream… What I was doing was going to the beach and screaming at the top of my lungs until I felt better.”

Come together as a community

MacKinnon said it’s very easy to be physically isolated at times like this, but you can also be emotionally isolated. Reaching out to each other is really important, she said.

“Maybe it’s social media for those in power, maybe it’s a call on a cell phone if you have service.”

Whether you have electricity or a working phone, there are a variety of ways to come together as a community, she said.

Research shows that inside out, inside out… when you’re feeling down, help others.— Dr. Stacey MacKinnon

“At home, we were where you came for coffee. We had the ability to make coffee…maybe you give someone a shower,” MacKinnon said.

“Helping someone out trying to clean their debris out of their house, or in the case of one neighborhood I know of in Cornwall, they’ve lost all the meat in their freezers… There’s no medium that they go to be able to refreeze them, so that everyone takes out their barbecue and cooks what they have and shares it.

MacKinnon said nothing makes you feel better than helping others.

“Research shows that inside out, inside out…when you’re feeling down, help others. And in doing so, others will help you and everyone will feel better.”

She particularly emphasized the importance of reaching out to people who may not be part of your own circle, but who are isolated and live alone.

“You may not know your neighbour. It’s okay, you can knock on their door. You can ask, ‘Do you need anything? Can I help you somehow? another one ?’ We need to reach out now…and help others we may not know.At this point, you might even make a friend.

Be kind and patient—to others and to yourself

Patience and kindness have been important over the past two years as we dealt with COVID-19 and the unpredictable economy, and MacKinnon said those virtues are even more important now that Islanders are dealing with the consequences. by Fiona.

“We’ll get back to all of those healthier habits once we can. And then…we’ll probably be a little more grateful for what we have. There’s no such thing as a power outage of six days to make you really appreciate a hot shower.”

“We can move forward”

MacKinnon said it’s important to recognize the reality of our situation – it’s bad and it hurts, but “we can move forward as long as we do it in slow, steady steps. We can not only get back to where we were before, but we can create new things that will make our lives, both personally, as a community and as a province, even better,” she said.

“But it takes time, patience, and more than anything else, it takes community and kindness.”