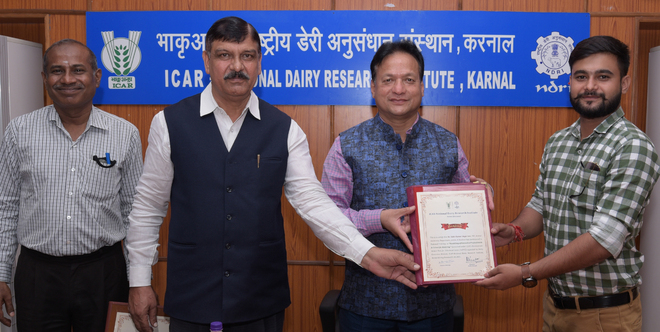 Karnal: The National Dairy Research Institute (NDRI), organized a national training program on the “development of extension professionals in scientific dairy” within the framework of the action plan for the development of caste annexes (DAPSC) . About 12 interns from Uttar Pradesh, Jammu and Kashmir and Haryana attended. Dr MS Chauhan, Director, NDRI, while delivering the farewell speech, highlighted the role of the dairy sector in doubling the incomes of farmers and the possible contribution of extension agents in improving the incomes and profitability of farmers. farmers.

Karnal: The DAV College (PG) Red Ribbon Club, Karnal, has organized various activities on the college campus to raise awareness of HIV / AIDS and the precautions to avoid it. Over 30 students took part in the poster design, slogan and essay writing contests. Shubham of first year B Com came first in the easy writing competition, while Khushi of first year B Com was second and Nancy of third year BSc medical was third. In the completion of writing the slogan, Vishakha from B SC (non-medical), Muskan from B COM first year, Karn verma from B.COM first year, respectively won the first, second and third positions. In the poster design competition, Tamanna from M SC (mathematics), Garima from BA in second and Disha from B COM in first year got the first, second and third positions. The director, Dr Ram Pal Saini, appreciated the efforts of Dr Rekha Chaudhary, head of the Red Ribbon Club in organizing such competitions.

Kaithal: The Diwali party “Utsav” was organized by the computer science department of RKSD College, Kaithal, in which various activities such as rangoli, cooking without fire, CV writing, debate and others. have been carried out. Director Sanjay Goyal inaugurated the program and said there is a need to preserve culture as well as technical knowledge.

Rewari: The seven-day national online workshop on â€œApplied Econometrics and Machine Learningâ€ organized by the Department of Economics at Indira Gandhi University (IGU) ended on Sunday. MDU Professor Kamlesh Gakhar (retired) Rohtak in his presidential address explained the importance of data and econometrics and described the role of statistical tests, hypotheses, etc. Professor Shakti Kumar of JNU, New Delhi, in his keynote address describes the precautions to be taken in framing econometric models and discussing the different tests on time series data.

CUH will introduce a new course

Mahendragarh: Central Haryana University (CUH) has been granted authorization to provide Postgraduate Diploma in Rehabilitation Psychology (PGDRP) from the Rehabilitation Council of India (RCI), New Delhi. Vice Chancellor Professor Tankeswar Kumar said the 10-place course will be introduced from the current academic session and will not only meet the demand for specialists and professionals in the field of psychology, but would also increase employment opportunities for students.