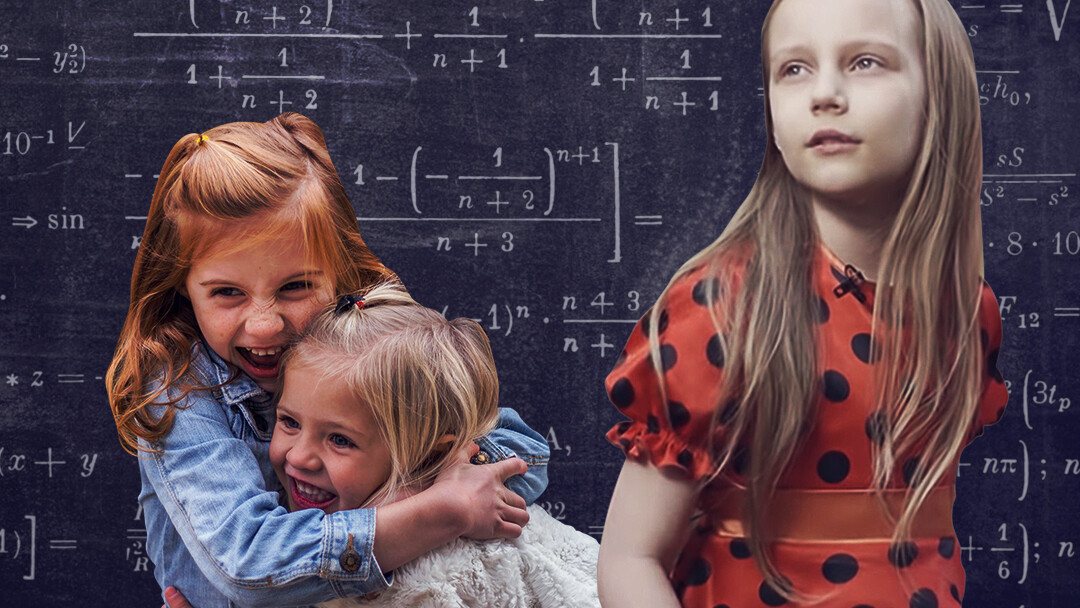 “Alisa Teplyakova, a nine-year-old freshman, passed two out of four exams,” a Moscow State University spokesperson told RT. The news came shortly after a member of the Council for the Development of Civil Society and Human Rights in Russia recommended suspending the young student’s studies. The story of Alisa Teplyakova, a young Russian girl who entered university at the age of nine, has received wide media coverage and continues to fuel debate. RT Documentary takes a look at the question to determine the price of early success. Tune in to the Child Prodigies: The Price of Success premiere on Monday for more!

Alisa Teplyakova is perhaps the most famous and talked about child in Russia. She is only nine years old but is already a university student. Alisa’s siblings are also very advanced in their studies. Some might even try to get into college earlier than their sister.

Are these children the product of early education or do they have a natural gift? Could we… and should we teach chemistry and arithmetic to a five-year-old child? What does adult life look like for a former child prodigy?

In the new film, RT Documentary tries to answer these questions.

Alisa Teplyakova is a nine-year-old student from Russia

The Teplyakovs have seven children and take care of all their offspring themselves, without the help of babysitters or grandparents. All children are home schooled.

Alisa, the eldest, is already at university. Heimdall passed his ninth grade tests at age seven. Five-year-old Leia has completed her fourth year. At 4 years old, Terra is just getting ready for school. Aylung is two years old and is already learning to read. Feylung and Tesey, the youngest, are therefore the only two not to break any records.

“What we are doing is actually revolutionary in terms of teaching. It is revolutionary in developmental psychology because there is a concept that the sense of constancy and logical thinking cannot be developed in a child under the age of twelve or eight,” explains Enveniy Teplyakov, the father of Alisa. “And our children can take tests designed for grade 9 at age seven.”

Evgeny and Natalya Teplyakov have developed their own teaching method

The Teplyakovs do not believe that some children are born gifted. They believe that any child’s intelligence can – and should – be developed as early as possible. That’s why they created their Accelerated Teaching Method.

Their methods have proven to be so effective that sometimes Natalia does not understand her children – so knowledgeable that they are in different subjects.

“I can hardly talk to him about biology, probably geography and other subjects,” says Natalya Teplyakova, Alisa’s mother.

Alisa’s parents wanted her to start school earlier because her reading, writing and math skills were advanced by four. But the school said she was too young. This is why Evgeny and Natalya decided to homeschool their children.

Alisa’s parents had wanted her to start school early, but no school agreed to admit her: they said the girl was too young

“They don’t accept that you go at your own pace; they want you to sit down and do what everyone else does,” Evgeniy says.

“There were a lot of psychologists who took the child aside and said, ‘You should start school at seven.’ A lot of people said, ‘She draws a man badly. She can’t go to school. The man is missing a few fingers.'”

In the fall of 2021, Alisa entered Moscow State University, one of the most prestigious institutions of higher education in Russia. Unfortunately, she did not score high enough to qualify for a state scholarship on her exam. But convinced that she will do well, her parents nevertheless decided that she should go to university for a tuition fee.

In the fall of 2021, Alisa entered Moscow State University and chose psychology as her specialty

When asked why she chose psychology as her future profession, Alisa looks hopefully at her father.

“It’s a mistake to ask Alisa why she needs to study psychology. She has no idea about the curriculum. But I do,” says Evgeniy Teplyakov.

As Alisa is only nine years old, the Teplyakovs asked the university to create a special schedule for her so that her parents could accompany her to class. However, the plan did not work as expected.

RT Documentary wanted to meet Alisa at college, but it seems she doesn’t go there very often. The Teplyakovs had constant arguments with the university. Alisa’s father complained that he could not accompany his daughter to classes, and the university authorities did not want to develop an individual program for her, even though it only took her a month to master the program for everything. the semester.

“Alisa hasn’t had an in-person class since September 10,” says Alexander Thostov, head of the neuropsychology department at Moscow State University. “As far as I know, she didn’t pass any of the tests either. They suggested that we adjust the program to accommodate Alisa’s abilities. We replied that since we don’t see Alisa in college, we don’t know what her abilities are.

Evgeny Teplyakov still insists that Alisa could graduate in two years. However, the psychology department has never seen anything like it, nor admitted such a young student.

Alisa’s parents are confident she can graduate in two years

“There is also another problem,” adds Alexander Thostov. “As for students majoring in psychology, we talk with them about sexuality, about relationships. I don’t understand how to teach all this to a nine-year-old child. Because there are certain age restrictions. Will her father cover her eyes and ears when these things are discussed in class?

The price of success

Alisa’s story has fueled debate in the media and among experts. But, aside from enthusiastic comments and amazement at the girl’s talents, it has drawn skepticism and even criticism from some experts.

“Unfortunately, many parents, [even] the most wonderful, impose their vision on their children. ‘You must be early! You have to show them! You must do it! Why aren’t you the first? Why aren’t you…’ We see a lot of such children,” says Natalya Shumakova, a doctor of psychology.

“We have many such cases, where parents have done their part poorly in the development of their children by demanding these achievements from them,” adds Natalya Schumakova. “These kids suffer from a lot of things… from nervous tics to quitting their jobs and walking out of the sphere altogether later. They burn out, you know.

Psychologists say that moving forward is considered more beneficial than not, but only to a certain extent: if you don’t skip more than two years. Going beyond that will likely lead to the loss of social connections and problems with social interaction and personal development. And those risks are growing exponentially.

RT Documentary spoke to former prodigies to find out their take on parenting and early development.

“First of all, I wish happiness and the greatest success to Alisa Teplyakova,” says Artyom Oganov. “I hope joining college at age nine was the right thing to do. However, I would advise against my child doing this. And I didn’t do it myself. But everyone has their own path to follow.

Artyom Oganov is a renowned chemist and Nobel Prize candidate. He developed a method to predict the crystal structure and properties of substances that have not yet been discovered. Artyom has worked at prestigious universities in Switzerland and the United States, but now lives in Moscow and is a professor at the Skolkovo Institute of Science and Technology.

Artyom Oganov is a renowned chemist

Artyom has been in chemistry since he was four years old. He was a prodigy and could outrank his peers in his education. However, her mother was a psychologist and had ideas about early childhood development.

“We had a big library and we liked to rummage through it. And my mom put all kinds of books in there, especially on the bottom shelf. And then she would wait and see what excited us. I got addicted to a chemistry book. My brother chose a math book. That’s what got us on our way.

When Artyom’s mother realized that the books were no longer enough, she persuaded the professors of the Mendeleev Institute to talk to her son, allowing him to attend lectures.

Although Artyom is a prodigy, his mother did not want him to skip classes: she was worried about his son’s psychological development.

“He was an incredibly devoted person to his children,” Artyom says. “Twice a week, she took me to the other end of Moscow to attend chemistry lessons. My mom sat with me even though she hated chemistry, and she took notes for me. When I was little, I couldn’t write fast enough. I wrote quite slowly. I understood a lot of things, but not everything, of course.

The gifted child went to an ordinary school on the outskirts of Moscow. Of course, he could have easily skipped classes quickly or transferred to a school with a more advanced curriculum, but his family decided that Artyom should go to school with his peers.

“A child should have a childhood,” says Artyom Oganov.

“If a person lives under constant duress, because there are super talented kids around them, and they try their best not to look like an idiot next to them, so she always has something to do… It’s not a childhood. It’s torture, a forced labor camp. The child’s nervous system will not develop properly under such conditions.

So I don’t want my kids to skip classes either. Not only intellectual maturity is essential, but also emotional.

Do you want to know more about Alisa Teplyakova and see more stories of former prodigies? Attend the preview of Enfants Prodiges!

How to Stick to Your New Health Goals, According to Science

The week in audio: The Nolan Show; Jimmy’s jobs of the future; Now you ask; Room 5 | Radio