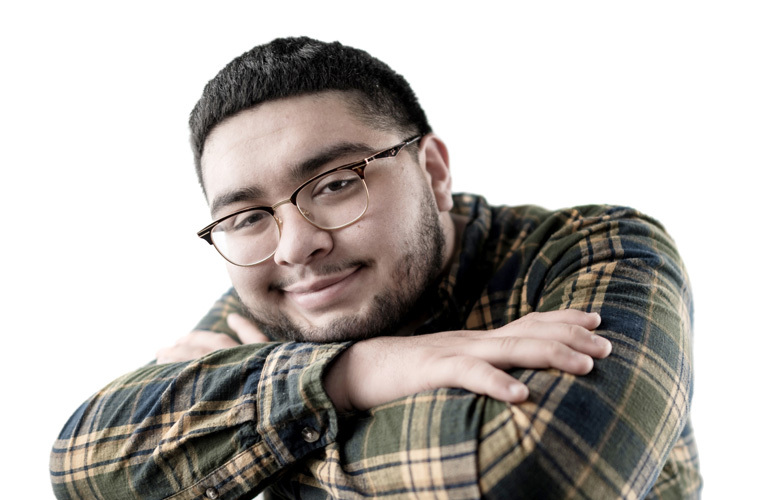 Psychology major makes the most of a second chance

Each year, more than 23,000 people leave the country’s reception system, of which less than 3% will obtain a university degree in their lifetime. This is one of four profiles celebrating students in the Promoting Achievement Through Hope (PATH) program, each of whom is turning that narrative on its head with the support of staff and their peers. All profiles are accessible in our introductory article.

The moment buzzed with excitement for Sal Hernandez Rodriguez.

In days, the 17-year-old former foster kid would begin his freshman year of college, a stark change from his trajectory two years prior. Even before attending his first class, Sal marveled in a room of his own in University Village.

Carrying his cache of personal effects, Sal spotted a care package on his side of the room. He was slightly confused.

The package — a laundry basket full of shampoo and conditioner, towels, toiletries and a Target gift card — was donated by PATH Scholars to ensure Sal had enough to ease her transition to college. of four years. For him, the package had a deeper meaning: someone was already watching over him, even before he set foot in a classroom.

“Seeing the care taken in preparing the package for me really meant a lot,” he said. “It was the first time I saw that people cared about me in college.”

PATH Fellows continued to care for Sal – funding school books, reminders of important meetings to attend, and gift cards for groceries and gas. While on the right academic path, Sal was tested outside of the classroom. About a year ago her grandmother passed away and her grandfather passed away shortly thereafter. Following the death of his closest friend, he wondered whether or not he should stay in school. Instead, he relied on PATH Scholars, the source that had given him so much support.

“Having someone there to listen to me with compassion and offer me support, I really needed that,” he said.

It wasn’t the first time he needed advice to get back on track. Living with his parents in Oakdale a few years earlier, Sal made what he calls “reckless decisions”. After a family dispute, Sal was arrested at the age of 15, taken from his parents and two younger sisters to a juvenile hall and placed in the foster care system.

In the custody of the Juvenile Justice Division, he admitted his guilt in court and was released to a rehabilitation home – living away from his family – with 24/7 supervision. Thanks to an on-site secondary school in Stockton, he proved he deserved another shot at his future, with high grades and completion of all his courses.

He began attending Chico State in the fall semester of 2019. While taking classes and living in UV during the week, he had to return to the Stockton group home every weekend until he turned 18. With each trip, he began to notice the contrast between the freedom, choices, and potential of a college. campus and the consequences of poor choices at home for rehab – and it gave him perspective.

“I saw the hardships people in the rehab house were facing,” he said. “Seeing them helped me value life more and appreciate the little things.”

With renewed commitment, Sal focused on college. He’s on the Chico State men’s rugby team, he attends a fraternity, and he’s said psychology is his major — a choice that stemmed from the therapy-based group home.

“I realized that one of my strengths was really listening and encouraging people,” he said, adding that he now envisions a career in social work and one day working as a therapist to help young adults with similar experiences to his in a juvenile hall. , or maybe a high school counselor.

“A lot of kids this age are like, ‘Where do I belong?'” he said. “I want to help those who are still trying to figure themselves out.”

As a former foster kid, first-generation college student, and man of color, Sal knows the importance of supportive mentors and is grateful that PATH Scholars have been there to keep him on track.

“PATH Scholars don’t just help you your freshman year, they help you every four years,” he said. “They’re like Super Glue. They will stick with you no matter what and support you because they want you to succeed.

Believing that he will reach the Beginning stage in two years, Sal is committed to graduating, not just for himself, but for those who supported him when he was at his lowest: his parents and his sisters, now aged 12 and 7. old.

“I care so much for my parents and put them under a lot of emotional stress,” he said. “I wasted time with my sisters. They are my heart, my world – I won’t let that happen again.

The odds are against them. Show PATH Scholars that you believe in their educational dreams and ensure they have the resources to achieve them by donating today at www.csuchico.edu/fosteryouth.