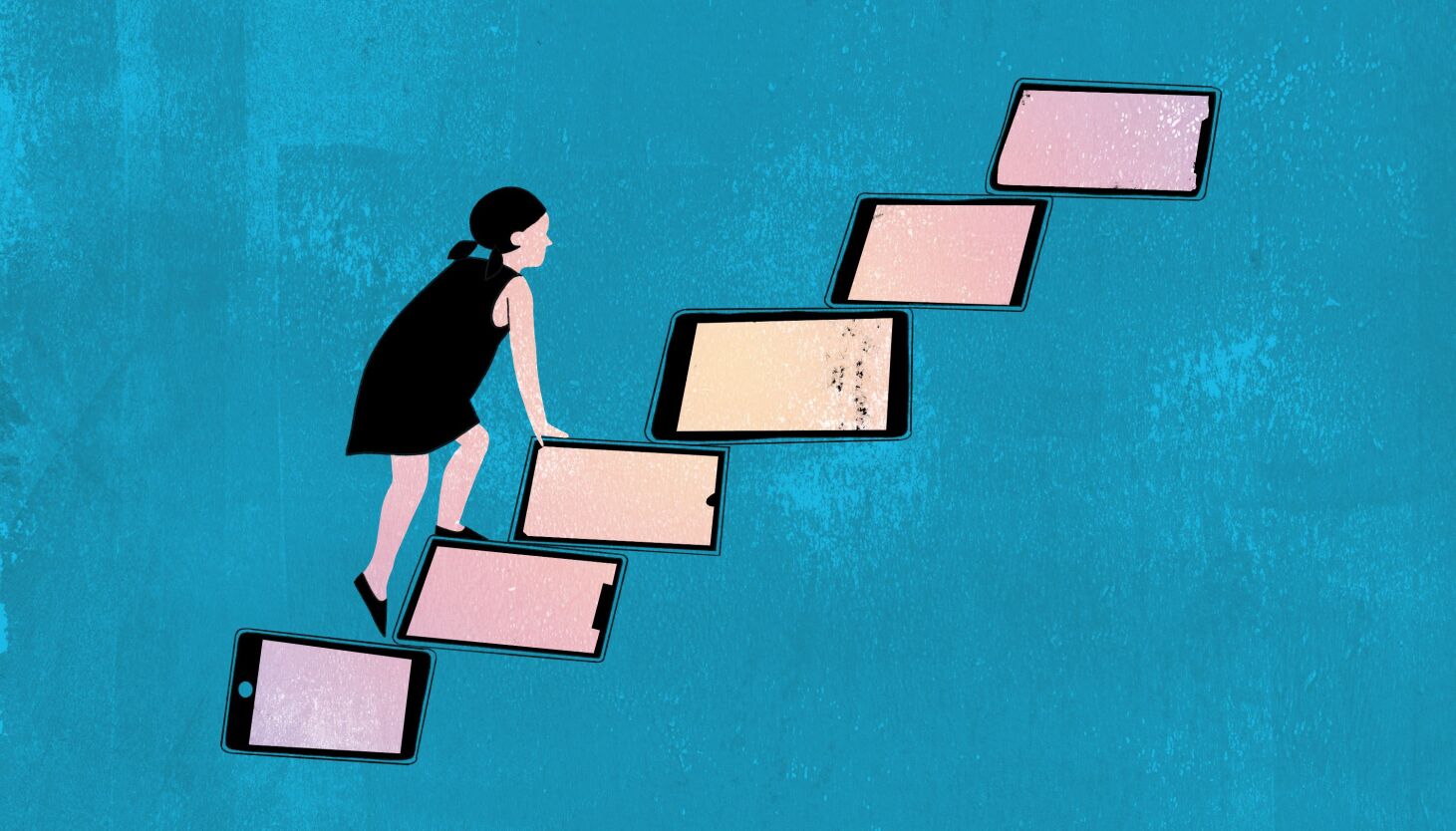 You should see the cathedral that Aaron built. The spire, overlooking a pine forest. The roof, painted in golden yellow. The grandiose nave and the blue stained glass windows. They all came out of the 16-year-old’s imagination.

Thousands of clicks later, you have him in Shrektopia, the virtual city he built in Minecraft, a building video game. Sitting next to him on the gray couch at Provo, Rachelle Miller Sorensen can’t help but marvel at her son’s digital dexterity. A thought popped into his head. Has he ever considered becoming an architect or an engineer?

This, digital health experts would say, is a good example of the virtue of screens. At their best, new technologies launch teenagers on a journey of creativity and self-discovery. At worst, they turn children into drug-addicted, violent or isolated human beings. At least, that’s what many parents seem to think.

Take a look at “Parenting in a Tech World”, a Facebook group run by Bark, a company that sells parental control apps. A mother is looking for prep materials to talk to her 9-year-old about ‘screen time addiction’ and ‘why too many screens aren’t good for you’. Another expressed frustration with Snapchat being “a ‘nightmare’ for kids. Dozens of people are looking for new apps or ways to spy on their kids. They’re not alone: ​​Nearly 9 in 10 American parents surveyed l last year by OnePoll for Smith Micro said their role was to monitor and control how their child uses the internet.

The proliferation of glowing devices and apps, from tablets to virtual reality headsets and from Instagram to TikTok, only seems to make parents more nervous. But screens shouldn’t be seen as dark amulets that suck life force out of children, say psychologists and anthropologists.

Rather than focusing on how much time children spend on their iPhones, parents should try to understand how they interact with them, they say. They also need to realize that digital media presents challenges, but also benefits for mental health.

“Just because a technology is new and scary doesn’t mean it has all the downsides,” says Nick Allen, professor of clinical psychology at the University of Oregon.

There are many good reasons to be concerned about children’s mental health. Starting in the early 2000s, more American teens reported struggling with depression and anxiety. In a recent advisory, Vivek Murthy, the US Surgeon General, exposed the extent of the malaise: between 2007 and 2018, the suicide rate among young people aged 10 to 24 increased by 57%. Over the past decade, the proportion of students who reported feeling sad or hopeless has increased by 40%, and the proportion contemplating attempting suicide has climbed by 36%.

In widely shared articles, psychologists such as Jean Twenge have argued that the root cause of this desperation is the rise of smartphones, the adoption of which by teenagers began to skyrocket after 2007. “They’re on their phones , in their bedrooms, alone and often distressed,” she wrote, painting a grim picture of how teenagers spend their free time. But critics pointed to evidence showing that eating potatoes or Wearing glasses has the same negative effects on children’s mental health as screens – virtually zero.

That’s because mental health, psychologists point out, is shaped not by one but by a jumble of individual and environmental factors. Murthy recognized this when he listed, alongside technology, such titanic forces as racism, gun violence, climate change and academic pressure as potential drivers of teenage angst. He also brought up genetics and socioeconomic status, which researchers say are predictors of mental health problems.

This does not mean that screens cannot have a negative effect on children. After studying 11,672 children between the ages of 9 and 10, researchers at the University of Colorado at Boulder found that more screen time was moderately associated with ADHD, poor sleep and poor grades. school. But the link turned out to be of little clinical significance, says Katie Paulich, a doctoral student at the university who led the study.

“Parents can take comfort in knowing that screens seem to have very little impact on mental health outcomes,” she says.

The positive side of engaging with the app

Researchers are now moving beyond a zealous focus on screen time to try to understand how technology benefits or harms teens in different ways. Social media, for example, can be an “amplifier,” says Emily Weinstein, a senior fellow at Harvard’s Graduate School of Education.

Being part of the BookTok community, a subset of TikTok where users exchange book recommendations, can fuel a teen’s passion for reading. A group chat with friends can help her feel supported and seen. But for some teenage girls — not all — being bombarded with photos of Instagram influencers can evoke feelings of bodily insecurity, Weinstein says.

The same app, however, can be used by young people to display their artwork, adding fuel to their creative fire, says Devorah Heitner, the author of “Screenwise: Helping Kids Thrive (and Survive) in Their Digital World.” They can also sell their crafts on Etsy, a marketplace, and learn how to become internet entrepreneurs, when they’re not leading citizen communities on Discord, a popular messaging platform.

When they get involved in online communities or learn how to manage Youtube channels and blogs and create content, teens learn skills that will help them survive later in the digital world, says cultural anthropologist Mimi Ito of using technology at the University of California, Irvin. These activities have a “real world that they never get to experience on safe school assignments,” she says. “They get real, authentic feedback from communities.”

The ubiquity of screens also provides teens with a window into health information. In a 2018 survey, 87% of teens and young adults said they went online to learn about fitness and nutrition, but also about stress, anxiety and depression. This access is especially valuable for vulnerable populations such as LGBTQ youth in rural areas, says Lauren McInroy, assistant professor at Ohio State University and media expert.

These teens often face a shortage of support groups in their area or may fear being seen attending. Online networks such as Trevor Space and discussions with mental health experts can be a lifesaver, she says.

Risks to watch out for

But technology isn’t all rosy. Teens attending workshops run by Weinstein and Carrie Jones, a sociologist also at Harvard’s Graduate School of Education, described feeling pressured by social media to constantly socialize, be straight students, and always aspire to be better. health. These pressures exist outside of smartphones, but “digital living can accelerate these difficulties,” Jones says. For adults, it can be helpful to ask teenagers “what is stressful in general, and then how does technology make it better or worse?”

Often the anxiety created by technology has nothing to do with laptops, tablets and iPhones, but stems from parents’ perception that they can be harmful. That’s partly because they’re being put too much of a burden on them to be gatekeepers, when really, implementing safeguards should be the job of tech companies, says Candice Odgers, professor of psychological sciences at the University of California at Irvine.

Powerful tech companies like Meta and Alphabet are battling for kids’ attention and hope to get as many of them as possible on products like Youtube Kids. Leaks from a former Facebook employee – the company has since been renamed Meta – highlighting internal concerns that Facebook’s apps could harm teens have sparked Senate hearings and fiery debates over companies’ responsibility to design safe platforms. But parents need to remember that they can’t control everything.

“I will not see everything my child does in this space. But I don’t see all that they’re doing in the offline world either,” Odgers says.

Miller Sorensen made peace with that fact. “It took a lot of that stress and fear away for me, I think, to be a little more open-minded.” But she hasn’t given up on influencing the way her children interact with the digital world. It allows them enough access to social media to chat with their friends about the latest TikTok craze, but not enough to spend hours there. The family shares an iPad, a laptop and, since Christmas, an Oculus virtual reality headset. In this way, children do not develop too strong an attachment to these devices.

His approach seems to have paid off. A few months ago, she sat down with Aaron in her school’s counselor’s office. When the counselor asked him what careers he envisioned, the teenager, perhaps remembering Shrektopia and the seed of an idea planted by his mother, nonchalantly replied, “Maybe architecture or engineering. ?”