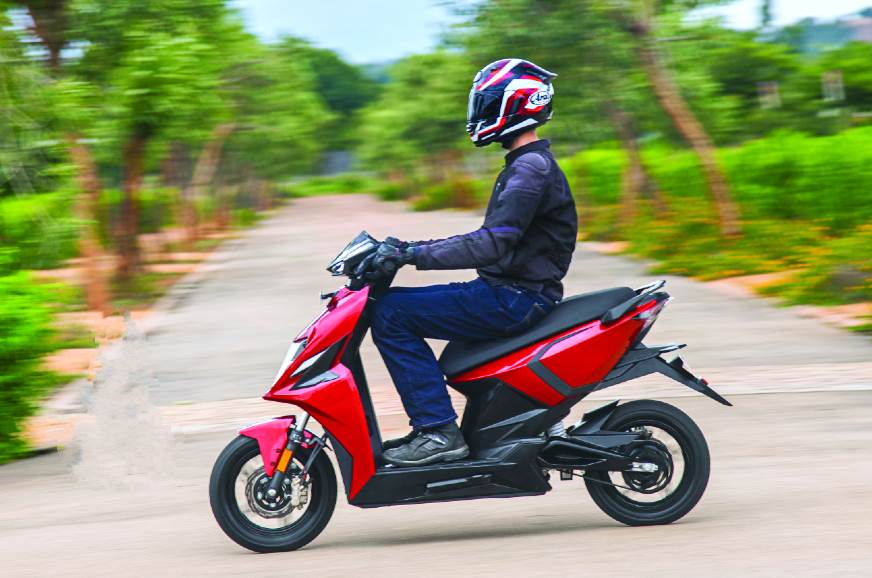 Almost a year after its launch, we are lucky enough to get on board this promising new electric scooter.

It seems to have become the norm that new-age electric vehicles from two-wheeled start-ups are far from ready when they launch. Bengaluru-based Simple Energy ‘launched’ its One electric scooter in August 2021, but at the time the scooter was actually at the prototype stage. Almost a year later, we can finally ride this highly anticipated electric scooter.

Turns out the company only let us ride their scooter on a very short loop in a gated housing corporation outside of Bengaluru. This means that we will only be able to share a first impression of this scooter for now and a detailed test drive will only be possible when Simple lets us drive their scooter on public roads. In a way, that’s a good thing, because the scooters we’ve experienced still don’t come off as fully finished products. But there’s good news, as the Simple One’s engine and chassis fundamentals seem to be in place.

Simple Energy claims this will be the fastest electric scooter when it goes on sale, and the specs certainly back that up. The in-house developed motor produces similar powers to the Ola S1 Pro (4.5kW continuous / 8.5kW peak), but it’s the 72Nm torque that is unmatched in the space of electric scooters. The company claims a segment-leading 0-40km/h acceleration time of 2.77s and a top speed of 105km/h.

Those numbers are impressive, but what struck me was that the throttle response in all four drive modes is smooth, predictable and easy to use. That being said, the first two modes show a slight overshoot where the scooter continues to accelerate for a fraction of a second after the throttle is closed. To their credit, well-tuned throttle response is something many EVs seem to struggle with and the Simple One is already far better than most EVs we’ve tried. The company says this will be fully resolved by the time the scooters go into production.

Even in the limited space we had to travel, the scooter managed the quoted 80 km/h quite easily in its top Sonic mode. Overall performance is as fast as an Ola S1 Pro in hyper mode, which means it should be among the fastest scooters in the country. But the real strength of the Simple One is its range.

With a 4.8 kWh battery, the Simple offers far more capacity than any other electric two-wheeler on sale today. The company claims a real range of over 200km in the lowest Eco mode, but that’s not the only tantalizing detail. Simple has also developed a system where the battery capacity is split into a fixed 3.3kWh battery under the floor and a removable 1.5kWh battery that fits under the seat. This will help with charging anxiety issues to some extent and it also means the company can easily offer a cheaper version of the scooter in the future without the removable battery.

It’s a smart thing Simple did, but there’s something to consider. Due to the design of this removable 7kg pack, it does not have the same thermal management capabilities as the main pack, so it can only be used to power the scooter in its slowest Eco mode. Which means that around 30% of the possible overall range will have to be in Eco mode, limiting the top speed to 45 km/h.

As for charging times, the scooter will take around 4.5 hours to charge from 0-100% on the standard home charger. In an industry first, Simple says it will sell an accessory fast charger (Rs 15,499) that doubles the home charging rate and brings the time down to around 2.5 hours. It should be noted that the removable battery will only start charging once the main battery has been charged up to 80%.

Simple One: comfort and maneuverability

The performance is therefore strong and Simple promises market-leading range levels. Another thing that looks quite impressive in most areas is the chassis. This tubular steel chassis is also a Simple in-house design and the company has done a good job in the suspension and braking departments. The brakes are powerful, but easy to modulate, although we did notice a bit of chassis flex at the steering head under hard braking. The company says this will be fixed by the time the scooters go into production.

That issue aside, the scooter did pretty well in the corners and it manages to do so while also feeling quite comfortable in the suspension department. The scooter currently wears 90 section tires at both ends and the company says the promised variant with larger tires will only be offered at a later stage. As for the suspension, there weren’t any bad roads for us to test it properly, but it’s clear that Simple went with a nice, plush setup. In fact, the soft-sprung suspension reminds me of the TVS Ntorq 125, and that’s a good thing because the TVS manages to be super comfortable while still being sporty and really fun to ride. The Simple One seems to be able to pull off the same trick.

As for the seating position, the handlebars are just high enough for tall riders to handle and it’s certainly not as cramped as the Ather 450, but not as roomy as the Ola S1 Pro. The 775mm seat height is fine for shorter riders, but the shape of the saddle could be improved as it slides the rider forward and doesn’t leave much room for taller people. Simple says they are working on it.

As for what’s under that seat, the storage space (26 liters with the battery and 30 liters without) isn’t segment-leading, but it’s still pretty good. The design of the company’s portable charger isn’t finished yet, so we can’t tell you how much space it will take up in the trunk.

Simple One: changes and features

Those of you who have been following the Simple One’s journey closely since August last year will have noticed that the scooter is a bit different from the launch event. That’s because the company has made quite a few changes since then, some quite drastic.

Changes over the past year include new front and rear LED lights and some body design changes. That alone is pretty significant, but the company didn’t stop there and also made a 2 degree adjustment to the steering lean angle as well as changes to the arm pivot angle oscillating.

These are serious chassis changes, but that’s not all either. Last year, this scooter used a chain drive system, but now the company has wisely opted for a belt drive which will prove quieter and require less maintenance. In all of this, the scooter has gained five kilos bringing the total claimed weight to 115kg, still about 10 kilos lighter than the Ola.

But it turns out that Simple Energy has even more work planned for this scooter. For example, the belt drive will be locked up on the final scooters and the company is still working on the engine regenerative feature which was almost entirely denied on our test scooters.

Simple’s smartphone app isn’t ready yet either, and the 7-inch TFT screen could have a slightly different layout with larger icons for riding modes when the scooter goes on sale. The display software itself was still in beta test mode and a number of features such as Bluetooth, cruise control and some basic touch functionality were not functional on our scooter. The battery charge indicator was also quite buggy and sometimes returned to 100%.

Another thing that needs to change quickly is the level of quality and finish. In terms of design, I think it’s a good looking scooter with clean, aggressive lines and a good sense of proportion. The Simple One’s silhouette is certainly reminiscent of the Ather 450, which isn’t a bad thing. Just like the Ather, it also has a premium looking side stand, a nice front number plate bracket and a beautiful aluminum swingarm. However, there are a lot of improvements that need to happen in other places, and things look pretty tough when you start looking at the details.

The body panels had rough, unfinished edges, there were large gaps between the panels in places, and some plastics were coming off completely. Simple’s loading flap design looked unfinished and also felt flimsy to use. In addition, it was also very strange that the company did not want us to ride the scooter in the rain, or even wet.

Now, some of these issues should level off once production begins, but clearly there’s still a lot of work to do here and apparently not a lot of time. The company says it wants to open test drives soon and estimates that the first deliveries to customers should begin by September or October.

Simple One: launch and price

On the bright side, Simple says that despite massive supply challenges, it is maintaining its original price of Rs 1.1 lakh, ex-showroom, and the first customers will get the scooter at the same price. It’s a fantastic price for this promised level of performance and battery life. When it’s ready, the Simple One will undercut its rivals as long as the company can afford to sell it at that price.

There’s a lot going for the Simple One and the company is clearly trying to address usability, range and price issues all in one go. I believe the basic fundamentals mostly seem to be in place, but from what we’ve been through, Simple still has a lot of work to do if they want to fix all of this before customers start buying scooters.

There’s also the fact that this fledgling company needs to prove it can scale its manufacturing process smoothly and consistently, especially as it claims to be sitting on over 60,000 bookings. That in itself can be a gargantuan mountain to climb, even before the world plunges into an unprecedented supply crisis – just ask Ather Energy. For now, I’m waiting to be able to properly test this scooter in its final form that will be released to customers.

How to Avoid Being Triggered