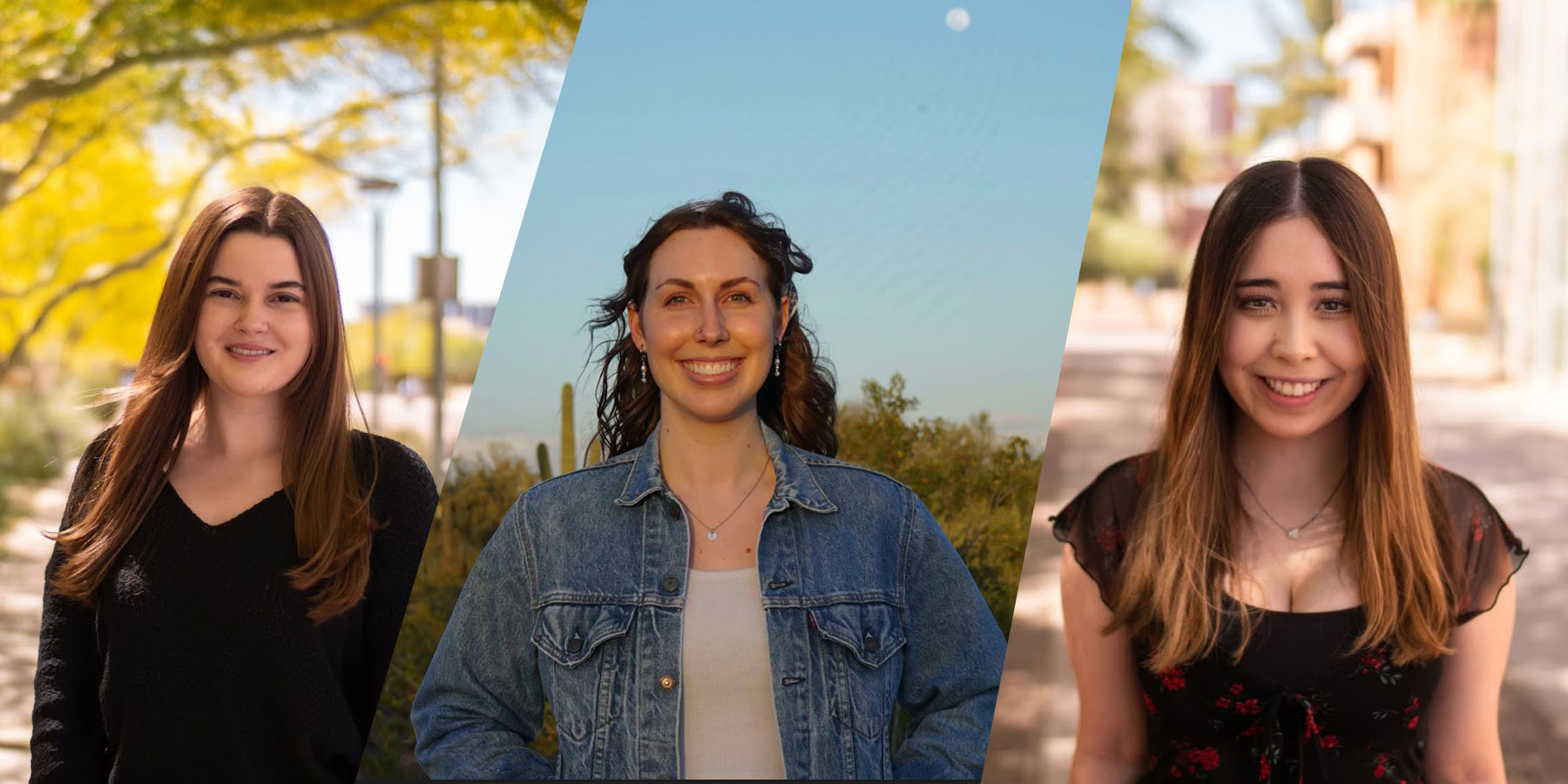 The best psychology students compete for the best undergraduate thesis

Undergraduate students from the Department of Psychology at Arizona State University recently presented their honors thesis to a panel of external examiners and their peers for compete for the title of “Best Undergraduate Thesis.”

Finalists Ashley Rivard, Lauren Paxton and Tatum Zapp were selected for their projects on the effects of comorbid anxiety in children diagnosed with ADHD, family predictors of educational attainment, and mapping vowel phonemes to arousal emotional, respectively.

Each year, the cohort produces graduate-level research projects based on datasets or research done by their mentor to answer questions of personal concern to undergraduate students.

“This research is done primarily by undergraduate students and reflects the advanced work being done in many master’s programs across the country,” said Guillaume CorbinProfessor of Psychology and Director of the Honors Sequence.

This year, Ashley Rivard was named the winner of the best undergraduate research paper in psychology.

In addition, the ministry presented scholarships to undergraduate students based on donor-nominated funds for their hard work throughout the year. Scholarships are available to any student in the Department of Psychology and promote interest in child development, biopsychology, intervention work, advancement of underrepresented students, and applied social psychology. The department also offers scholarships for general academic merit to high-achieving undergraduate students.

Rivard is part of the Hyperactivity, Executive Function and Attention Processing (HEAT) Lab with assistant professor Lauren Friedman and helps conduct research on ADHD and its effects on children’s executive functioning and working memory. Additionally, research from the lab aims to inform future intervention programs to improve existing interventions and develop new treatment approaches based on our understanding of the neurocognitive dysfunction that underlies ADHD.

She never imagined herself in a research setting, but at the start of the honors thesis, Rivard contacted Friedman and asked to be in his laboratory. While Friedman was new to ASU and hadn’t taken on an honors student before, the lab was an instant fit.

Rivard plans to go to medical assistant school and hopes to work with children and developing populations.

“I really wanted to do something in medicine, but being a doctor wasn’t really for me because I want to spend a lot more time with patients than having to deal with insurance and the business side of being doctor,” Rivard said. . “Deep down, I have a passion for people.”

Rivard was very surprised to be selected as a finalist but felt very validated after the long hours at the HEAT Lab.

“I was shocked. I certainly cried a little bit. I was so incredibly happy. I worked so hard on it, and being recognized as a finalist was like the greatest honor ever,” Rivard said.

Paxton is part of the Adult Family Development Project (AFDP) led by Regents Professor of Psychology, Laurie Chassin. This project examines the intergenerational transmission of substance use disorders. This is a 20-year, three-generation, genetically informed, longitudinal study that examines the development of alcohol and drug use and substance use problems, as well as the protective factors that promote healthy development. healthy.

“I’ve always been very interested in externalizing behavior, which describes things like substance use, impulsivity, and antisocial behavior,” Paxton said.

In addition to her research, as part of the Prison Education Project, she serves as a mentor to incarcerated teenage girls. Paxton teaches an introductory psychology course and found that many teenage students could relate to the course content.

According to the ACLU, every day approximately 60,000 young people in the United States are incarcerated. In Arizona, about 130 out of 100,000 youths are incarcerated, with rates declining since 2013.

“Students were saying that their own adversities or childhoods were very similar to some of the examples in the textbook or were saying that they had personally experienced high levels of verbal conflict,” Paxton said. “It’s a bit scary at first when you have the cell doors closing behind you and you see these students rejected by society, but the students are really great. They are grateful and really curious. The incarceration you really strips away a lot of your humanity, and I think those students just appreciated having a peer who saw them as another person.

Paxton’s honors thesis uses AFDP data to examine families with substance use disorders. She wanted to examine how having a parent with an externalizing disorder such as alcohol, drug use, or antisocial personality disorder can impact educational attainment within the same family.

“We found that between families, parents who had externalizing disorders also had lower educational attainment, which also contributed to lower educational attainment in their offspring,” Paxton said. “We thought this might be because parents with low levels of education and many externalizing disorders struggled to document appropriate academic achievement for their own offspring. They may have difficulty helping their children study or with homework, and may pass on their own behavioral limitations. We also found that within families, the most impulsive siblings have lower levels of education than their other siblings.

“I’m really interested in the intersection of law and psychology,” Paxton said. “I would like to conduct research and then work in public advocacy for people struggling with externalizing factors like substance abuse or mental health issues.”

Zapp’s thesis, “Extending the Wham-Womb Effect: Mapping Vowel Phonemes on the Emotional Dimension of Arousal using Cartoon Illustrations,” was conducted under the mentorship of Professor Mike McBeath and Christine You of Perception, Ecological Action, Robotics and Learning Laboratory (PEARL).

The PEARL lab conducts research on perception, both visual and auditory, and Zapp wanted to see why we initially developed a sensitivity to specific vowel sounds.

Zapp was previously in the Culture and Ecology Laboratoryand was drawn to evolutionary psychology because of our common evolutionary experience and how there are similar patterns of behavior across cultures and species.

His thesis was an experiment to show the relationship between monosyllabic pseudo-words containing specific vowels and the emotions displayed in cartoon illustrations. She hoped to find that specific sounds generated excitement or emotion in participants. Participants engaged in a matching task where they heard sounds and then chose the illustration they thought matched the sound. Overall, she found that participants matched /ӕ/ sounds with high arousal emotions and /u/ sounds with low arousal emotions.

“High arousal emotions would be like joy, excitement, or anger, and low arousal emotions would be like relaxation,” Zapp said. “Our study revealed that there is an innate relationship between embodied emotional expression and speech production. From an evolutionary perspective, being able to recognize emotions through auditory should have adaptive value due increased chances of survival In theory, correctly identifying high levels of arousal could allow you to perceive threats and dangers and react more appropriately.

In the future, Zapp also plans to attend physician assistant school and is currently working as an intern at Neurology Consultants of Arizona, an outpatient neurology practice in Scottsdale.

“I’m truly honored and grateful to be recognized for my work, and while I’m a little nervous about presenting again, this whole experience has been so cool and rewarding,” Zapp said.