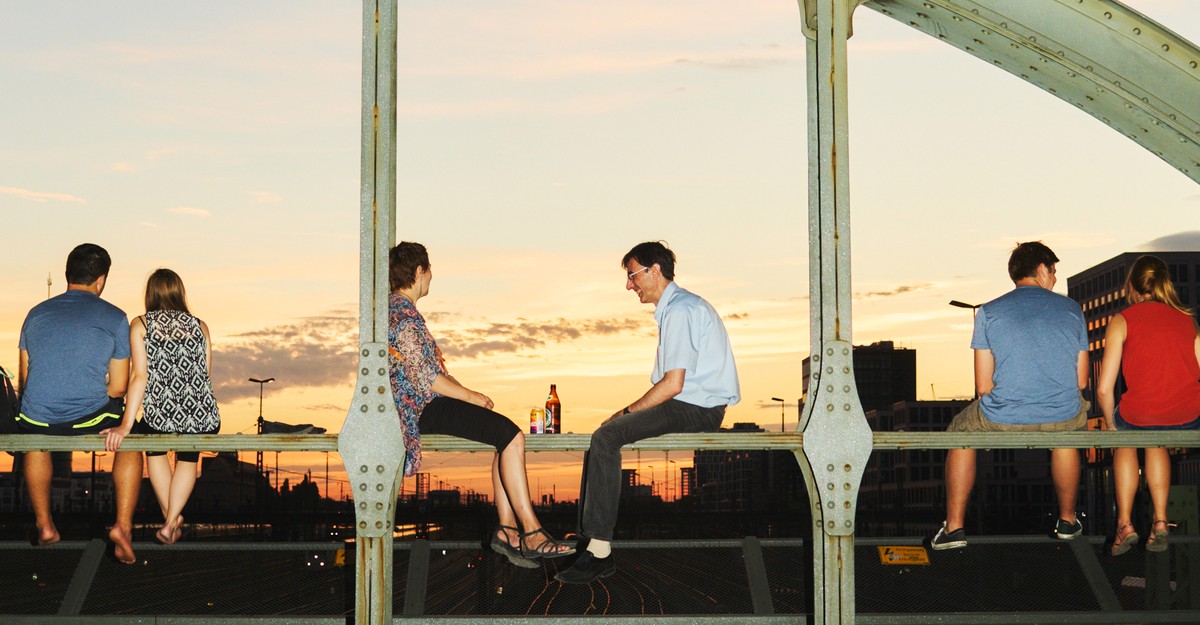 The case for going out with a friend

Online dating is the most common way for couples to meet these days, but sometimes it feels like it’s designed to disappoint you. You swipe right and don’t match. You start a chat and the conversation sparkles. You go on a date and there’s no spark. You meet someone you really like and you never hear from them again.

I have a suggestion: try going out with a friend instead.

I did — my partner and I were friends for nearly five years before we started dating — and I think we’re onto something. Of course, a couple can be happy no matter how long they’ve known each other, and love at first sight is a wonderful concept. But love at 1,000th views can be a particular delight, and not just in my biased opinion. Jessica Cameron, a psychology professor at the University of Manitoba who has researched the “path from friends to lovers,” told me she suspects that couples who start out as friends have, on average, relationships happier and stronger. She is currently designing a research project to see if this is true.

Cameron’s intuition is based in part on the idea that romantic relationships are more fulfilling when they include genuine friendship. “Developing that friendship-based intimacy — all that trust and support, warmth and closeness — that’s really crucial,” she said. “So when you have that basic ‘friendship,’ theoretically, you have a better chance of being in a happier relationship.”

This concept is consistent with the rise, since the mid-1960s, of “self-expressive” marriage in America – the notion that a committed relationship should be a pathway to self-actualization and personal growth. Hundreds of years ago, people viewed marriage as a pragmatic arrangement to provide the basic needs of life, and then from the mid-19th century saw it as a vehicle for love, researchers say. romantic. Nowadays, people expect even more. The perfect partner is “someone you share a ton of interests with, find meaning and fulfillment with,” said Reuben Thomas, a sociologist at the University of New Mexico who studies how couples meet.

So it’s perhaps no surprise that many people end up having a relationship with a friend. The exact number is unclear; a remarkable two-thirds of respondents in a recent survey said their current romantic partner was a friend first, but this figure may not apply generally, as the study only interviewed college students and respondents online and was not representative of the general population.

This statistical opacity is partly the result of the fact that research on how relationships begin has historically focused on the chemistry between strangers and the neglected romance between friends. Nonetheless, Thomas surmises that the general trends are that dating a friend became more common during the 20th century as more opportunities for male-female friendships presented themselves, but then less common in the 21st as dating online have replaced other ways couples meet.

Dating a friend may seem riskier than dating a stranger – it certainly was for me. When I shared my feelings with my current partner one night years after we became friends, I was terrified of ruining a close friendship. It’s a common and understandable fear, but I wonder if it’s a little exaggerated. The transition from friendship to dating is often presented as a binary – you’re not dating, and then you are – but in my experience it was more gradual. By the time a friend feels compelled to bring up the subject, they may not be taking so much of a risk as responding to a momentum already in place. It’s easy for me to say now, knowing how things went, but even though my partner didn’t have feelings for each other or we ended up breaking up, I like to think our friendship was pretty strong to continue, even if in a modified form.

This path to romance may be worth the risk. On the one hand, couples who started out as friends have the pleasant knowledge that they initially spent time together simply because they enjoyed each other’s company, rather than because of others. more superficial reasons why some people associate, such as earning power or physical attractiveness. .

In fact, a 2015 study found that couples who were friends before dating differed more in their level of physical attractiveness than couples who weren’t. The researchers speculated that either the friendly couples first fell in love with each other’s inner qualities instead of their appearance, or they became more physically attracted to each other because of those qualities. interior. Either way, it’s a great story.

Another strength of relationships that start as friendships is that couples have a more complete idea of ​​who their partner is from the start. In my experience, this makes the dizzying first stages of a relationship all the more enjoyable – with my partner, our pre-existing bond served as a sort of tailwind that carried us through the sometimes awkward moments that occur during the early date someone new. Going through that phase with someone I trusted was more fun than going through it with someone I was trying to figure out if I could trust. In fact, ‘after’ wasn’t all that different from ‘before’ – just like we had when we were friends, we talked constantly and vulnerable, and frequently texted when we were separated.

Hanging out with a friend is also nice from a practical point of view. It already means knowing what someone looks like when they’re not in courtesy mode, aiming to impress. It can help you make an informed decision about starting a relationship and possibly save you from discovering a blatant incompatibility after dating someone for weeks or months.

Additionally, the relationships that emerge from friendships begin with a place of care and warmth, which can mean avoiding the exhausting game that can occur between two dating-weary strangers conditioned to fend for themselves. In the early days of online dating, both parties have so little information about each other that they scrutinize (or at least I did) how every outfit or attempted joke might land on a stranger. Dating someone who already knew me brought me all the warm, restless feelings of starting a new relationship, but added the relief of letting go of that questioning. He came up with his own set of scary questions –Will this relationship work? Are we all going to make it out okay?— but it sounded like things we, being friends and not just Tinder matches, could talk about together.

Because friends have this history of mutual respect, Cameron hypothesizes that being friends first has the potential to prepare couples for a more equal relationship. In a study she conducted, participants selected more gender-egalitarian scripts in hypothetical dating scenarios — for example, around who plans the date or who pays for it — when the couple in question started out as friends. than when he started out as a foreigner.

Of course, having a built-in friendship dynamic can also introduce problems. “A lot of what causes conflict in relationships is unmet or poorly met expectations, and when you’re friends with someone, you have different expectations of them… [than] in a romantic relationship,” Sejal Barden, a counselor training professor at the University of Central Florida, told me. For example, two friends may have a different understanding than two partners of the quality time they should be spending together, and Barden says some couples, to their detriment, don’t discuss what might need to change now that they’re not. not just friends.

And overall, if everyone went out with a friend, Thomas pointed out, society would likely become even more stratified by race, class and education than it already is. This is because people’s friends tend to be more like them on these dimensions than others. “When couples meet as strangers, they’re more likely to cross borders,” he said.

It’s an argument, however, to make it easier to cross societal boundaries, not to avoid hanging out with a friend – which, I maintain, may be surprising. The rewards are plentiful, but the challenge, and the stress, lies in deciding to bring up the topic of dating and initiating a moment you can’t undo. Sometimes people need a helping hand. It’s hard to say why I started this conversation with my girlfriend at the exact moment I did, but I think it was because I knew that in a few months she would be leaving the town we were living in. . I felt like I would wonder what might have happened if I hadn’t said anything and our lives had gone our separate ways.

Life can give you useful deadlines this way, but maybe we should try not to rely on it. If you have a friend you’re considering having a similar conversation with, my advice is this: don’t wait for a nudge.

Social factors must be taken into account in educational reforms – psychologist