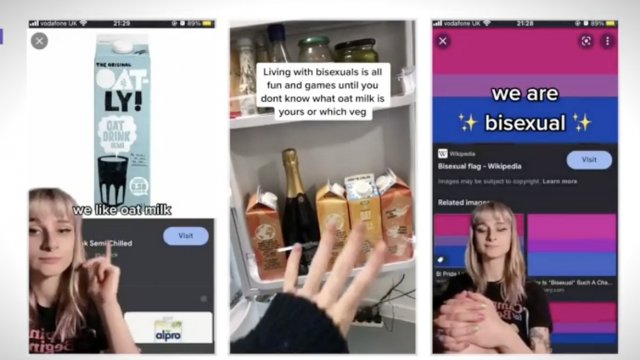 The growing bisexual community has created its own online culture (VIDEO)

Many memes that started as a joke have now become part of bisexual culture online, allowing the community to feel part of their created story.

To be bisexual is to be attracted to multiple types of people – men, women, and non-binary people.

But if you explore enough bisexual spaces online, being bi also jokingly means ordering your coffee with oat milk, wearing combat boots and denim jackets, and for some reason not being able to get along. sit on a chair…straight.

“Obviously, the basic nature of bisexuality is cuffed jeans and a beanie,” said Sarah Pappalardo, co-founder and editor of satirical news site Reductress. “You know, it’s just those little things, and really just pointing out the nuances of identity that are fun and relatable, and you know, let people laugh at themselves and their own culture.”

Pappalardo credits Reductress’ bisexual contributors with the site’s most popular posts about bisexuality, and they note that several other memes have sprouted from social media. The hashtag #bisexual has over 16 billion views on TikTok, over 11 million posts on Instagram and a YouTube video titled “How Bisexuals Sit” has over 800,000 views.

This specific video is one of many. It’s a great example of something that started as a joke and then went viral to the point that it’s now part of this culture of silly jokes and shared history within a growing bisexual community. A “bi chair” was even designed by a Brazilian artist and then made by a father from Iowa.

“Since bisexuality is such a big tent, we kind of see this very particular bisexual subculture springing up on the internet,” Pappalardo said.

“It’s a way of defining ‘us’ in a culture that often ‘invisibilizes’ us or completely erases us as bisexuals,” said Julia Shaw, author of the new book ‘Bi: Hidden Culture, History and the science of bisexuality”. .” “So how do we identify with each other, and what are our jokes? What is our community? And as part of that meme, culture is almost an essential part of that point.”

Shaw, a queer psychologist and researcher based in London, wants to start more open conversations about sexuality and attraction.

“I wrote a book about bisexuality because I had so many questions as a bisexual person and an academic that I wanted answers to, and I really had a hard time finding it,” Shaw said.

“Bi” is like a history book for the growing bisexual community, compiling decades of research and writing on bisexuality that was previously scattered and erased even in LGBTQ literature, as well as historically misunderstood by society as a sexual deviance. In 1974, a New York Times article described it as a “largely mysterious way of life”.

Shaw’s book also touches on her experiences as a bisexual woman today and what it means to engage in bi spaces online and to see bisexuality better represented in pop culture. Shows like the NBC sitcom “Brooklyn Nine-Nine” and The CW’s musical “Crazy Ex-Girlfriend” have won praise for their portrayal of bisexual characters.

“That’s also what I’m trying to do with my book ‘Bi’ is to really bring the stories out of the shadows…which can really help connect bisexuals to their own path and their own own sense of self,” Shaw said. added.

Nearly one in six Gen Z adults in the United States identify as bisexual according to a Gallup poll earlier this year, making it the most common LGBTQ identity among Gen Z, Millennials and Generation X. Acceptance of LGBTQ people in the United States, increased legal protection against discrimination and, again, online visibility.

But despite all that, Shaw notes that most bisexual people haven’t come out, and many are likely not connected to safe LGBTQ spaces online. For this reason, the visibility of these communities – even those filled with silly jokes and memes – is important.

“You feel validated, you feel affirmed, you feel part of a community that shares that experience,” Pappalardo said.

“These kinds of spaces can act as a massive buffer for things like anxiety, depression, and other negative outcomes that come from feeling lonely and isolated,” Shaw said. “And, you know, maybe struggling with the visibility or lack of visibility of bisexuality.”

As more people learn about bisexuality, its history, and its culture, Shaw hopes to see even more stories and books from people who love “regardless of gender.”

His book “Bi” is released in the United States this Pride month on June 28.

Using psychology instead of fear to market safe travel