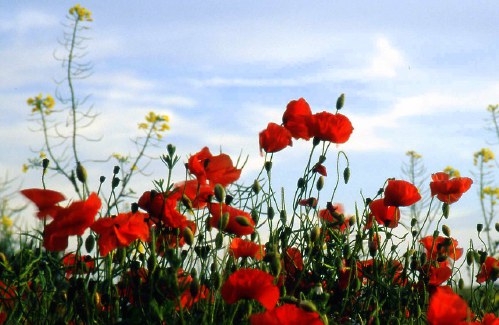 The miraculous and mysterious poppy

When I think of poppies, I think of wearing the red crepe paper poppies distributed by the American Legion Auxiliary on Remembrance Day to honor the sacrifice of our fellow Americans who served and died for our country. That is, until I read a mind-blowing essay by Jannick Deslauriers in the current edition of Orion review.

It made me think more deeply about our unconscious connections to the rhythms of nature, including war, and other mysteries beyond my faint comprehension.

Opium poppies have been cultivated by humans since our earliest civilizations in Neolithic times. The plant has long been revered to alleviate the suffering of the most difficult parts of a person’s life: birth and death. But this is not a one-sided story. The poppy is the door to many realms – good and bad – as the author notes, The door “opens-closes, life-death, pleasure-pain, freedom-slavery, memory-forgetting, suffering-liberation and when ‘he doesn’t rock, he lives on his doorstep, ready.

The threshold state for poppies is unique because, unlike most plants, they do not grow every year. They can remain dormant for up to 100 years, waiting for the soil to be disturbed. So when the fields of Flanders were torn and shredded by artillery and trenching during World War I, poppies came to life, turning the barren land into fields of blood-red flowers, growing around the bodies of soldiers. fallen in battle. It is the story of how the poppy became the symbol of the sacrifice of hundreds of thousands of broke soldiers during this brutal war.

Poppies are remarkable in other ways. Of the tens of thousands of plants on earth, only one, the opium poppy, can produce morphine in measurable amounts. Morphine, distilled from poppy opium, is also unique. It is the only molecule in nature that has “evolved to adapt to the key in the receptors we have in our brains and spines” for pain relief and, in other circumstances, pleasure.

Following the thesis of Michael Pollan in The botany of desire, Deslauriers asserts that our relationship with the poppy is reciprocal, “that plants domesticate us at the same time as we domesticate them, and that they evolve to meet basic human aspirations”. The mystery of the poppy, for her, is that this plant, unique among all the others, has learned â€œwhat we want to feel the mostâ€.

This trial is not meant to be an ode to morphine which can be a hopelessly addictive and life-destroying drug, especially now that science has invented synthetic opioid compounds like oxycodone and fentanyl which are hundreds of times more addicting. No, this essay is an ode to the reality that life is often a mystery beyond human comprehension.

Poppies are a good example. The author’s assertion, supported by Michael Pollan, is puzzling. That the opium poppies have co-evolved with us, learning what we most desire to feel. The poppy’s ability to emerge from hibernation when disturbed by war to bloom profusely as red as the blood of a fallen soldier is also bewildering.

Other Mysteries – Was it only by chance that we just lost a 20 year war against a small third world country decorated with opium poppies, which happens to be our national symbol in honor of our fallen heroes? And how is it that after spending $ 9 billion during this war to eradicate opium production, poppy cultivation has not declined but exploded?

The final mystery is the nature of the war itself. We regard him as an abomination, an external enemy. But what if the war is not outside of us but part of who we are? This is the point of view of James Hillman, the late and legendary Jungian psychologist. He looks at war not through the prism of science or theology, but from an understanding of archetypal mythology and psychology. What he says seems undeniable. “Where else in the human experience, except in the throes of ardor – that strange coupling of love with war – do we find ourselves transported to such a mythical place.”

To resist our instinctive urge to rush to war, the first step is not to deny but to admit that we have a problem, that war is in our DNA. Society already understands how to control unbridled sexual passion and lust by establishing norms, customs and rituals to restrict and redirect these urges in socially acceptable directions. We could do the same with war, but we don’t.

Worse, we did the opposite. Loosen the prohibitions, even become cheerleaders for the war. Already, while our troops are still taking their boots off Afghanistan, experts and politicians are talking about our next war.

This is the terrible truth of war – the greatest mystery of all.

(Jean Stimmell lives in Northwood. His blog can be viewed online at jeanstimmell.blogspot.com.)

My Turns are opinion-based essays submitted by Monitor readers and members of the community. The opinions expressed in My Turns are those of the author and do not necessarily reflect the opinions of Concord Monitor and its staff.