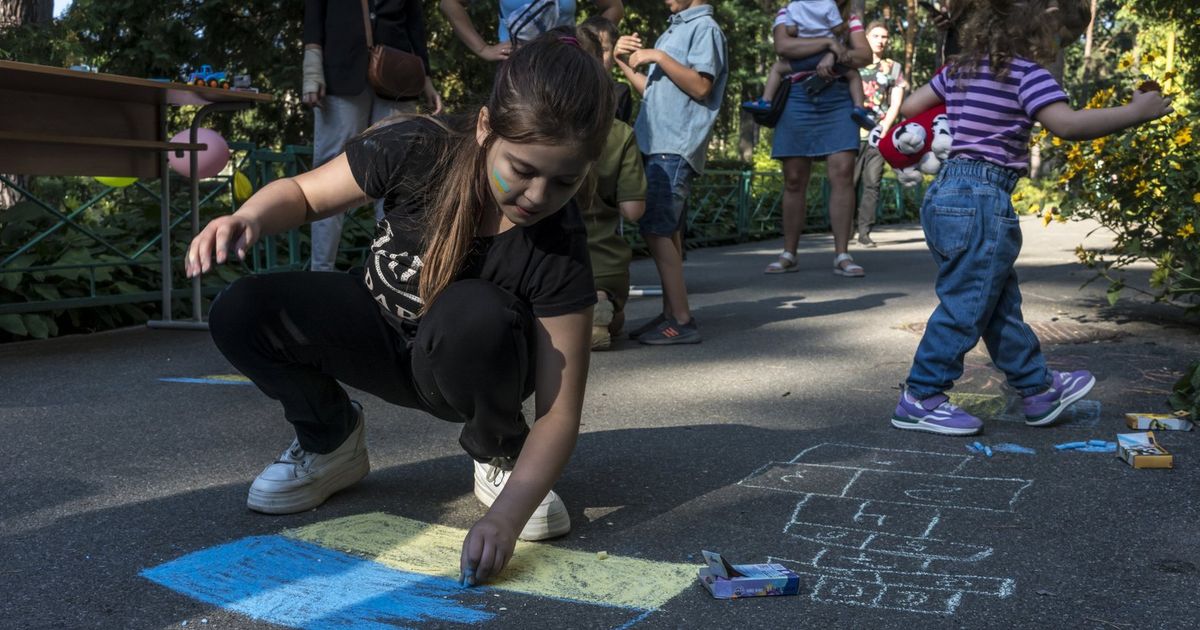 The school year resumes in Ukraine, but the dark season of war disrupts lessons

BUCHA, Ukraine – Bodies that littered the schoolyard in April have disappeared. The blood on the walls has been cleaned up and the broken windows have been largely repaired.

Yet School No. 3 in the Kyiv suburb of Bucha, the site of some of the war’s worst Russian atrocities, did not open when classes began Thursday for millions of Ukrainian children. The reason for the delay: All schools are now required to have bomb shelters, and the basement of School No. 3, which residents say was once used as a torture chamber by Russian soldiers , is still a prohibited crime scene.

For 6-year-old Vera, who says she loves math and castles, that means distance learning. She had been looking forward to the first day of school, when, according to tradition, first graders are hoisted onto the shoulders of older students to ring a bell to usher in the school year and kick off a day of celebrations.

Instead, the day before school started, she sat at a solitary desk outside her school in Bucha, posing with a bell in her hand. She smiled, but only briefly, and her mother, Lyudmila, said she was upset that she was not in a classroom despite the school’s attempts to make the day festive with songs and a small ceremony.

“It’s a dark and unwelcome experience in childhood suffering,” James Elder, spokesperson for UNICEF, the United Nations Children’s Fund, said in an interview.

With sandbags outnumbering backpacks, classes limited by the number of children who can cram into bomb shelters, and schools equipped with first-aid kits, the day was not so much a end of summer vacation than a continuation of the dark season of war. Thousands of schools were damaged by Russian bombs and rockets, hundreds completely destroyed and for millions of children a day normally filled with excitement and anxiety began with a lesson in what to do. do when the air raid alarm sounds.

And it’s for kids who can go back to class at all. With thousands of schools damaged or destroyed, Elder said, less than 60% are expected to open on time.

It is estimated that 2.8 million of the country’s 6 million children have been driven from their homes by the war. If they are lucky enough to find a place in a classroom, it will probably be in an unfamiliar city. An additional 2 million children are estimated to live outside Ukraine and will connect remotely to attend school with Ukrainian teachers or attempt to integrate into new schools with lessons taught in foreign languages.

And then there are the hundreds of thousands of Ukrainian children living under Russian occupation in eastern and southern Ukraine, where Moscow is trying to impose the new Russian curriculum and where teachers who refuse to cooperate face harsh reprisals, including kidnapping and torture, according to Ukrainian officials.

Over the past week, an average of 500 families have been recorded daily leaving occupied territories in southern regions of Ukraine, according to the National Resistance Center, a government agency supporting resistance efforts in the occupied areas. One of the main reasons given, according to the agency, was the approaching school year, with parents desperate to protect their children from Russian propaganda in the new curriculum.

Even as the Russian military faces an escalating counter-offensive and ammunition depots in the occupied territories are struck at night by Ukrainian forces, Moscow remains engaged in a concentrated effort to Russify the population in the areas under its control.

Schools are at the heart of this campaign.

Russian Education Minister Sergei Kravtsov said in late June that Ukraine’s education system “needs to be fixed”. According to Moscow, that means teaching a version of history that aligns with the Kremlin’s false narrative that there is no such thing as a Ukrainian nation.

Yuri Sobolevsky, the exiled deputy head of the Kherson regional administration, said Russian forces were terrorizing schools and recently abducted a local headmaster who refused to teach the Kremlin curriculum.

“There is enormous pressure on all school principals in the region,” Sobolevsky said.

Teachers receive training on how to deal with battlefield injuries and what to do in case they come across unexploded ordnance.

UNICEF said it reached around 1.7 million children and their caregivers, offering psychological and other support.

“From Yemen to Syria, what we’ve learned is that children absolutely need this psychological break from war,” Elder said. “And attending classes plays a vital role in that.”

The fact that schools are opening in Bucha and other hard-hit towns across Ukraine is in many ways remarkable.

Anatolii Fedoruk, the mayor of Bucha, said that in the early days of the war, many families sought refuge in schools, seeing them as places of refuge.

“They were wrong; they weren’t safe,” he said. During 32 days of Russian occupation, he noted, schools were turned into firing posts and places of oppression.

He spoke outside School No 5, where a tank had taken up position in the schoolyard, the blackened walls of a high-rise building across the street bearing witness to the violence.

Fedoruk credited the nonprofit Global Empowerment Mission, a nonprofit disaster relief organization, with providing much-needed help to rebuild the city’s 15 schools so most could open on the 1st september.

“One of the most difficult questions for parents considering returning is whether their children can go to school in a safe environment,” he said. “It’s not a complete post-war reconstruction, it’s about bringing the kids back to the classroom and the parents back home.”

But many families have nowhere to return. Entire towns in eastern Ukraine were virtually razed to the ground, and many of these families fled west when the war began.

This places a burden on cities like Lviv in western Ukraine.

“While every effort is made to meet the needs of children and their families in Lviv and surrounding areas, it is overwhelming,” said Dr Irwin Redlener, co-founder of the Ukraine Children’s Action Project, a non-profit group lucrative. And many Ukrainian children have special needs given the trauma they have witnessed.

“There are two looming issues that can undermine the future of Ukrainian children and the country itself: a long-term education disruption; and persistent, unmanaged psychological trauma,” he said.

Lyudmila says she tried to explain what is happening to Vera, her daughter, although she only offers a “lite” version.

Her daughter knows that Russian soldiers broke into her home when they fled. But her mother keeps the details of the horrors that unfolded at her school, which has children in grades 1 to 12 and which Lyudmila also attended as a child, under wraps.

Vera should have “good memories” of school, as she once did, Lyudmila said.

This story originally appeared on nytimes.com. Read it here.