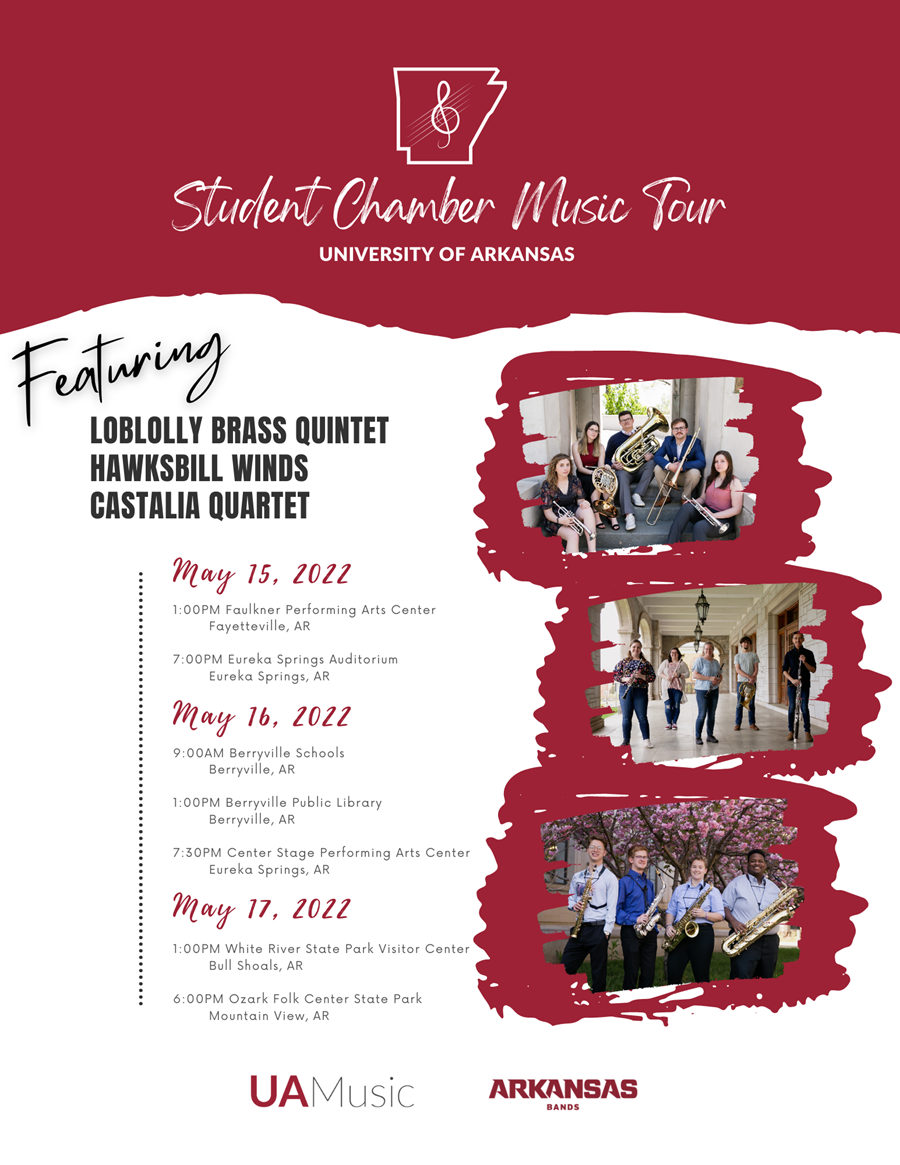 
The U of A student chamber music tour begins its first season in northern Arkansas communities next May. The 2022 tour will feature three exceptional student ensembles: Hawksbill Winds, Loblolly Brass Quintet and Castalia Saxophone Quartet.

The tour pushes the boundaries of student learning by allowing participating students to experience performing in a variety of venues and communities while performing at the highest caliber. The community aspect of the tour drives its mission. Chamber music uniquely connects with audiences, enabling performer-to-listener conversation and encouraging accessibility for all. In its inaugural year, participating ensembles will travel to Eureka Springs, Berryville, Bull Shoals and Mountain View over the course of three days.

This tour was made possible through the Music75 initiative of the U of A Department of Music, the U of A Band program, and the Wally Cordes Teaching and Faculty Support Center Student Success Grant. For more information, please contact Katey Halbert at [email protected] Donations to this program can be made here.

The Hawksbill Winds is a student wind quintet at the U of A. Since forming in the fall of 2021, the ensemble has performed numerous times on campus and in the Northwest community. Arkansas. Hawksbill performed standard works as well as original compositions and works by underrepresented composers.

The set’s name comes from the well-known scenic landmark of Hawksbill Crag in northwest Arkansas. They strive to represent the serene feeling associated with nature, through an overall setting. Hawksbill Winds hopes to provide the community with an entry point into the world of chamber music through outreach and public performance.

The band consists of members from the Northwest Arkansas area: Abigail Short (flute) from Greenwood, Lorilee Erdman (oboe) from Prairie Grove, Olivia Harrison (clarinet) from Bentonville, Josue Avelar (bassoon) from Lowell and Derrick Rassinier (French horn) from Eureka Springs. Members of the ensemble have performed with the Symphony of Northwest Arkansas, the Fort Smith Symphony and Arkansas Philharmonic Orchestra, as well as various ensembles around campus.

Members of Hawksbill Winds are pursuing various degrees at the University of Alberta, including music performance, music education, and psychology.

The Loblolly Brass Quintet is a student-organized ensemble at the U of A. The quintet’s mission is to grow as professional musicians through a diverse repertoire, mature performance opportunities, and collaboration.

The band is named after the state tree of Arkansas to symbolize the home and roots of the whole. This group is currently composed of two trumpets (Megan Park, Kyra Brockhausen), horn (Rachael Breitenstein), trombone (Ray Lenhart) and tuba (Brady Callicott). Members of this ensemble have performed with the Arkansas Philharmonic Orchestra, the Fort Smith Symphony Orchestra, and the Symphony of Northwest Arkansas. Members of this group have also performed at Lincoln Center, Meyerson Symphony Center, Chicago Symphony Hall, and Washington, DC.

The ensemble enjoys playing many genres of music ranging from Renaissance music to pop arrangements. Loblolly’s diverse repertoire helps in their mission to develop as musicians by providing a wide range of styles and performance opportunities. In the fall of 2021, Loblolly had the honor of performing for the iconic Stilleto Brass Quintet and also performed regularly in brass recitals at the U of A.

The name Castalia has a double meaning. One comes from Castalia subspecies of a plant in the Nymphaeaceae family, also known as water lily. The other is from Castelia City, a location from the popular “Pokémon: Black and White” video game, which is a coastal metropolis based in New York. As several members of Castalia are avid gamers, the namesake combined of the delicate beauty of the water lily and a city is both memorable and related to the members of Castalia. The name embodies what they hope to achieve in their performances – the appreciation of beauty in the music performed.

In addition to their time as chamber musicians, the members of the Castalia Quartet are also accomplished soloists. Their professional accolades include first place in two different categories at the National Association of Music Teachers of Arkansas Solo Competition, performing in the U of A Honorary Recital, and performing with guest artist Dave Liebman. .