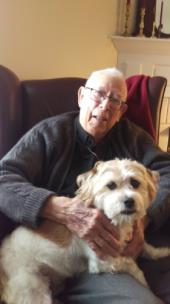 He was born in Yazoo City, MS on March 19, 1927 to Mary Estelle Stricklin Ruby and Walter M. Ruby. However, her Stricklin grandparents and their ward, Roxy Rosenberg, were her primary caregivers. His grandfather, John Stricklin, was at one time the mayor and owned the local funeral home which passed to his uncle when his grandfather died when Walter was four. Walter grew up working in the funeral home and making ambulance calls. He dropped out of high school to join the Navy where he was a member of the hospital corps. He was always disappointed that World War II was over before he could participate in action.

Using the GI Bill and not wishing to return to work in the family business, he enrolled in Ole Miss where his mother had been Miss Ole Miss and his uncle Pete Ruby had been an All American footballer. He was a proud member of the ATO there. After graduating and working a few years in MS, he went to visit his younger brother John who was stationed at Ft. Campbell. He decided to stay in Clarksville, Tennessee. where he taught 7th grade and went to graduate school at Austin Peay, then headed the branch college at Ft. Campbell. Walter left Clarksville to work on a doctorate at UTK. He always said he took out a home improvement loan to fund this lawsuit.

In 1960 he moved to Chattanooga to take up a position at what was then the University of Chattanooga. He developed the counseling center and taught in the psychology and education departments. He inspired a kind of loyalty in his students, and they remained in his circle of influence for years afterward. Over the years, he has served on numerous boards or consulted with various agencies such as, but not limited to, the Governor’s Council for Youth, Orange Grove, and Vocational Rehabilitation. In 1969, when UC merged with UTK, he continued as an associate professor in the Department of Education. Before leaving UTC in 1980, he transitioned to part-time and completed an internship in clinical psychology at Moccasin Bend. Walter found his calling as an independent school psychologist in Bradley County, Franklin County, and Hamilton County. For about five years before his retirement, he became an employee of the Hamilton Co. Board of Education as a supervisor of school psychology. He continued as a contract school psychologist for several years after quitting a full-time job and hated giving it up due to health issues. He loved working with children, their parents and his peers and he continued to hear from many of them about the differences he had made.

Retirement gave him the opportunity to continue to be an avid reader, to enjoy music and art, to paint primarily watercolors, to travel, to become a master gardener, and to learn and practice tai- chi.

Walter was a strong man of faith and had been an active member of TEC. In the mid-2000s, he joined the Reformed Episcopal Church and was first ordained a deacon and then a priest. He and others formed St. Andrew’s Chapel on Signal Mountain.

Walter was grateful for the care he received from Drs. James Stanko and John Stone and their staff, Guardian/Accent Home Care and Hospice of Chattanooga.

At his request, there will be no service.

The family would be honored if you are so inclined to make a donation in their memory to Metropolitan Ministries, 4001 Rossville Blvd., Chattanooga, TN 37407 or a charity of your choice. And like Walter, if you like a good Scotch, toast it with a shot glass. Slainte!