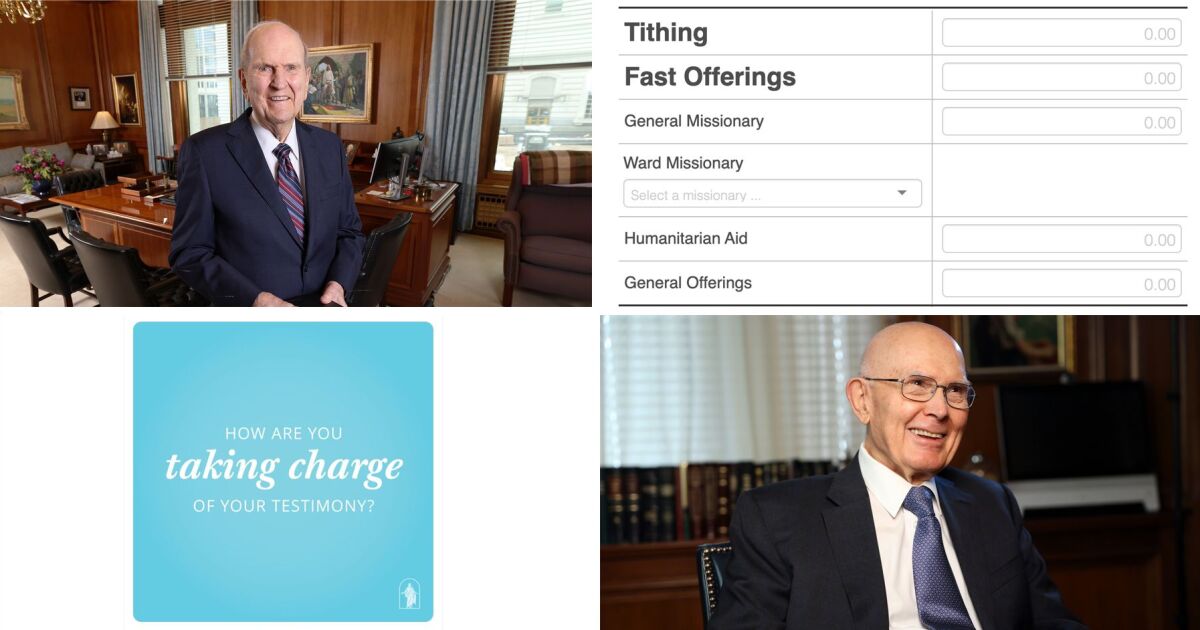 During the week of August 7-13, President Russell M. Nelson of The Church of Jesus Christ of Latter-day Saints became the senior apostle in this dispensation and invited others to share how they nourish their testimony. The Church also announced changes to the tithing settlement process.

President Dallin H. Oaks, First Counselor in the First Presidency, celebrated his 90th birthday with an appearance on the Church News podcast, and he shared 12 lessons he learned over nine decades. A three-part series on religious freedom highlighted the importance of protecting this right for all of God’s children. The Church introduced a new Historian and Recorder.

Latter-day Saint artist Dan Wilson painted a Second Coming mural for the Washington DC Temple. Counselors and experts outlined resources for leaders and members for ministry in times of crisis. And a missionary from Texas has won a major award for his volunteer work in his mission of service.

Read more about these stories below.

1. President Nelson is the oldest apostle of the last days

Four months after becoming the senior President of The Church of Jesus Christ of Latter-day Saints, President Nelson has now become the Church’s senior apostle in this latter-day dispensation.

Compare dates with others who have served

The First Presidency of The Church of Jesus Christ of Latter-day Saints has announced changes to improve the tithing settlement process.

The term “tithing settlement” has now been replaced with “tithing declaration”.

“This change underscores that the primary purpose of this interview is to give members an opportunity to declare their tithing loyalty, not to ‘settle’ a score,” the First Presidency wrote in a letter to general leaders and priesthood premises, dated Thursday, August 11.

On August 10, President Nelson posted on social media, “Recently I invited you to ‘take charge of your own testimony.’ Please share with me the steps you are taking to achieve this. I look forward to being inspired by you!

President Oaks celebrated a historic birthday on August 12. Born in 1932 to Stella and Lloyd E. Oaks, the First Counselor in the First Presidency of The Church of Jesus Christ of Latter-day Saints turned 90.

Listen to the podcast, discover the 12 lessons he learned, reflect with him on his life through this video and read 9 quotes from the past year

5. Why is religious freedom important?

ROME, ITALY — President Oaks has spoken about religious freedom for much of his 38-year apostolic ministry.

It’s a topic he’s been prepared to address, said the first counselor in the First Presidency of The Church of Jesus Christ of Latter-day Saints.

Kyle S. McKay, a General Authority Seventy, has felt drawn to a certain scripture since becoming Church Historian and Recorder on August 1.

Get to Know Elder McKay

7. Meet the artist who painted a mural for the Washington DC Temple

Most budding artists begin their careers in a spare bedroom at home, crowding out other family needs. Dan Wilson was no exception – starting in an upstairs bedroom. Over the next few years, he moved on to the living room, then to a part of the unfinished basement that eventually had four walls and a door.

“The paint was everywhere,” smiles Heather Wilson, Dan Wilson’s wife of 13 years. “We still find paint in random places all over the house, even in the freezer. I thought it would always be like this.

See more of Dan Wilson’s painting of the Second Coming

8. How Psychological First Aid Can Help Church Leaders and Individuals Support Others During a Crisis

Refugees fleeing a bombed city. Survivors of an earthquake. Families devastated by suicide. Witnesses to a tragic accident. There are so many who need support and care in a crisis. Learning psychological first aid can help.

Psychological first aid was developed by the National Child Traumatic Stress Network and the National Center for PTSD. It is an evidence-based approach to helping anyone after a traumatic event.

9. Texas missionary honored for good works on mission of service

Elder Caleb Wood doesn’t think his story is special. But the standing ovation said otherwise. At a special banquet on July 21, Elder Wood was named Dallas, Texas, “Volunteer of the Year” by D CEO Magazine for his work with the non-profit organization Trusted World.

“I have been asked several times why service is so important to me,” Elder Wood said in his acceptance talk that evening. “The more I answer this question, the more I realize my answer is a bit selfish – I like to make other people happy, and making other people happy makes me happy.”