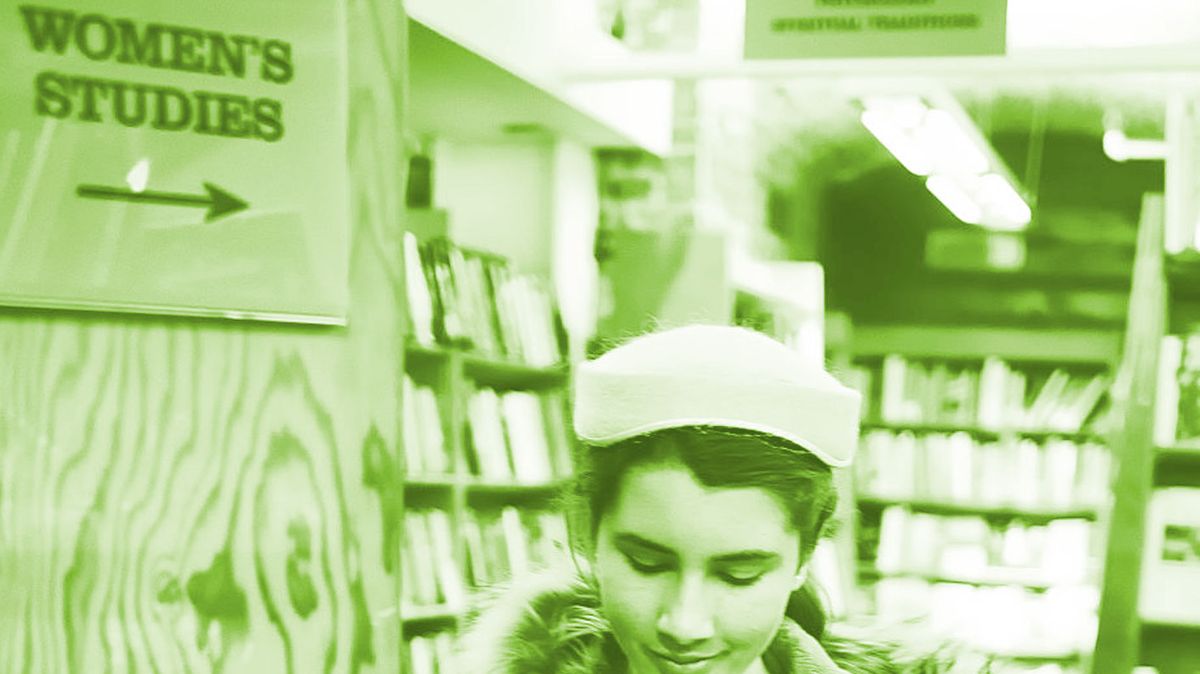 I began the research that led to my pioneering work, women and madness, 53 years ago. The book challenged institutional psychiatry, psychology and psychoanalysis. Thus, I was particularly interested in attending the opening panel of Barnard’s 47th Academic and Feminist Lecture on Living in Madness: Decolonization, Creation, Healing. The panel was titled “Voluntary Topics*: Decolonizing the Psychiatric Institution”.

With few exceptions, the speeches were totally incomprehensible.

The conference was a feminist conference organized by the Barnard’s Center for Research on Women. Yet not a single speaker uttered the word “woman”. With one exception, not a single speaker once referred to the work of a female psychoanalytic theorist or critic of psychiatry. The only theorist mentioned was Sara Ahmed, a British-Australian-Pakistani ‘queer lesbian’ of color who pioneered the idea that ‘willing subjects’ are in fact ‘resisters’. (Please don’t ask me what that means.)

Although the speakers employed a pseudo-Mandarin language intended to impress, dominate and silence, I was nevertheless able to understand this: they pleaded for the destruction of borders and frontiers of all kinds; viewed chaos as “liberating” and “revolutionary”; and tended to romanticize “madness”. Although I launched the idea that psychiatric diagnoses can certainly be stigmatizing and punitive in sexist, racist and classist ways, I never idealized psychological suffering as “liberating” or “revolutionary”. It’s more like a trip to hell, never chosen.

“Mental illness,” a term hotly contested by many sufferers, is very real. It is not simply a reaction to social or political forces. If that were the case, everyone would be equally “crazy” – or somehow. This is not the case. Living under the imagined paradise of socialism or communism or the right kind of nationalism does not automatically “cure” everyone who suffers from schizophrenia, depression, anxiety, panic attacks, insomnia, suicidal ideation and other symptoms of post-traumatic stress and/or who are sociopaths, psychopaths, alcoholics, drug addicts, rapists or abusers.

And people who suffer from “mental illness” are not being helped, as evidenced by the mind-blowing homeless people on the streets and subways of New York, some of them violent, most of them in urgent need of care that doesn’t simply do not exist. We cannot force paranoid schizophrenics to take drugs that at best calm them down. They just won’t comply. We can’t force people with bipolar depression to take pills that have terrible side effects and, as a friend put it, “steal my soul.”

Remember: my generation of benefactors have opened up the horrible public hospitals and shortened the stays in the psychiatric wards of the municipal hospitals, and we are now responsible for those whose “mental illness” prevents them from facing the demands of society. and who fell. through the cracks. They received no care or compassion during their institutionalization, and they receive much less of it on the streets now.

I therefore share the desire of the panelists to help those who suffer psychologically, to understand them, to create benevolent communities so that we are less alienated, less alone. But I make it clear. Speakers did not.

I was grateful to Dr. Camille Robcis, the first responder, for speaking clearly, clearly and simply, and for relating the origins of what she calls “institutional psychotherapy” in France. However, she only referred to Lacan, Foucault, Fanon and Tosquelles – all men – but none of their main French counterparts: Marie Balmary, Ilse (Rothschild) Barande, Simone de Beauvoir, Princess Marie Bonaparte, Janine Chasseguet-Smirgel, Luce Irigaray, Julia Kristeva and many others. And although Dr. Robcis repeatedly mentioned the Nazi camps and Nazi fascism, the word “Jews” never crossed his lips.

Instead, the compliance exhibited by the panel was totalitarian and embarrassing. Dutifully, nearly all speakers began by saying that they were speaking on lands stolen from various Native American groups (Lenape, Ojibwe, etc.), as if even saying so was morally redemptive and absolved them of any responsibility. .

Although we could see everyone visually – they were on screen – everyone described themselves in terms of gender and sexual identity, skin color, ethnicity, clothing, jewelry.

“I am a brown-skinned cisgender woman with highlights,” said Barnard Center for Research on Women senior associate director Dr. Miriam Neptune. Moderator Dr. Ann Pellegrini identified as they/she/he and as “gender/gay/with short brown hair.” Dr. Camille Robcis identified himself as “half Mexican, half French, with curly blond hair”. Dr. Emily Ng has been identified as her/him and has not identified herself further. Dr. Lara Sheehi first spoke in Arabic and identified herself in Arabic characters; in English, she describes herself as “a light-skinned Arab cisgender woman.” Dr. Liat Ben-Moshe’s name and very light, charming accent sounded Israeli, but she did not identify as such. On the contrary, she identified herself as wearing lipstick, jewelry, glasses, like a woman, sitting in her wheelchair.

I must admit that I understood very little of what the second speaker, Dr. Emily Ng, said. His study was based in China. She did not criticize totalitarian communism, Maoism, the mass murder of millions of people, the ongoing genocide of Uyghur Muslims. She spoke of “ghosts”, “spiritual possession” and “mediumship” versus “diagnoses”. While China was never ‘colonized’, it always wanted a more ‘porous’ ‘cosmo-political universe’.

Zionism. Palestine. Of course, so central to “decolonizing madness”.

The third speaker was the very energetic Dr. Lara Sheehi. She started talking about “stolen land” and “solidarity with political prisoners everywhere, especially in Palestine”; on the “decolonial feminist solidarity” which opposes the “colonial colonialist logic”, “the brutal occupation” and the “soldier settlers”. Quoting Sara Ahmed on “stubbornness as a refusal to conform” and employing “a decolonial and queer methodology” against “heteronormative patriarchy”, she proclaimed that one could then “talk life, talk Palestine” and , “despite the strangulations of Zionist practices” one can “practice liberation”.

She has been release. Its purpose was to defame Israel. Perhaps she thinks it’s a form of political psychotherapy or a way to rise quickly in contemporary academia.

Dr. Sheehi described a brief case study that somehow sounded very familiar to me. They were Amjad, an Arab-Palestinian father, and his 7-year-old daughter, who were delayed, interminably, at the Kalandia “crossing”, which, Sheehi points out, is actually a “checkpoint”. . Father receives humiliating treatment from ‘occupying soldiers’ – who order his daughter to ‘pee in the car’ rather than allow her to get to the front of a usually very long queue to find a bathroom. Amjad’s psychological symptom was that he had a “lump” in his throat. His symptom was eventually clarified as “rage” at the alleged occupation that did not allow him freedom of movement or dignity. The symptom disappeared when he unleashed his rage.

Something about this presentation seemed too flashy and recognizable. Actually reminded me of the movie The present. There too, there is an Arab/Palestinian father with his 8-year-old daughter who is delayed and humiliated at another checkpoint. I wonder if Saleh Bakri, the actor who plays the father, also felt a ‘lump’ in his throat – or if the filmmaker, Farah Nabulsi, faced his own rage by turning to a very clever propaganda?

Dr. Sheehi never once mentioned the reasons for these checkpoints, namely the incessant suicide bombings, car rammings and stabbings of Israelis by Arab/Palestinian terrorists. I’m very surprised that she didn’t mention the so-called ‘apartheid wall’. I was grateful for that.

The last speaker was Dr. Liat Ben-Moshe. Its openness amazed me.

She said that as a person with a disability, she understood that Diaspora Jews, historically, were viewed as “weak” and to overcome this apparent “disability” she turned to “Zionism and a national type which is very strong. She went on to suggest that “recovering from disability can be very transformative, liberating”. According to her, “madness is created by colonialism, racism, police violence”. Dr Ben-Moshe also warned against “chemical incarceration” (forced psychiatric drugs) and “carceral capableism”.

What significant contribution this makes to disability studies, to the relationship between disability and psychological states, or to women with disabilities, escapes me.

Has this become of academic feminist conferences and organizations? I’m pretty scared. Women’s studies (I was an early founder) collapsed women in gender studies, then in LGBTQ+ studies – never to be seen again. Transgender women, preferably sex workers of color, have supplanted biological women as the most important topics. The National Women’s Studies Association as well as organizations I co-founded, such as the Association for Women in Psychology, are now also queer, LGBTQ+ focused, and more concerned with police brutality against black men and their incarceration. – a little less with continued male violence against women of all races, classes, ethnicities and geographical locations.

Are all non-scientific academic “discourses” as strange, as incomprehensible, as politically conformist as these speeches of Barnard? Has the woman, as an honorable subject, been permanently removed?

So much was made obscure, confusing. The image chosen for the panel is an image that I find difficult to “deconstruct”. I was told it was an old Israeli military structure. The artists/architects “aim to accelerate the process of its destruction and disintegration, which is no longer used by humans, and instead ‘returned to nature’.” It was created by Oush Grab of the Decolonizing Architecture Art Residency. Perhaps others immediately understand its relationship to the subject of the panel and to the conference itself.

Three Ways to Harness the Power of Anxiety